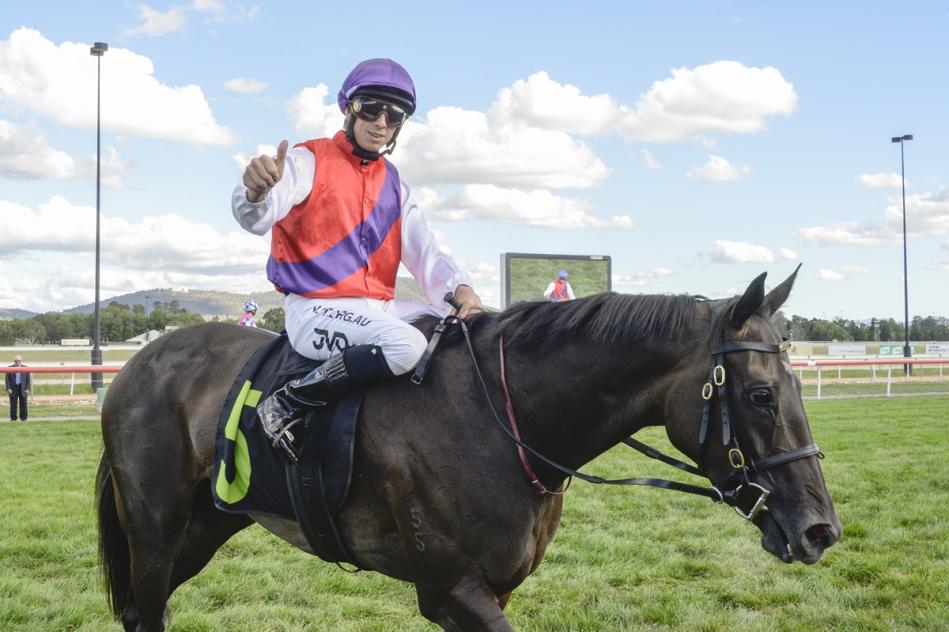 Intriguing opener for the babies, with most on debut. Keen on one of them, home track filly 6. ONE SUPER CHICK (Super One x I'm No Chicken by Snitzel for Neil Osborne/Brendan Ward) who steps out for the first time off a smart trial seven weeks back, and has been kept up to the mark. Sire could rattle the clock over this distance.

MAIN DANGERS: Rival local filly and debutant 4. DIFFERENT TIME (Albrecht x Exciting Time by Mister C for Gratz Vella/Simon Miller) draws well and was solid through the line in a recent trial. Sire's only two career wins came at first and third starts up to Group 3 level, and jockey is having a terrific run. Another home filly 3. DANCIN' TILL DAWN (Al Maher x Sweet Chimes by Bel Esprit for Norm Gardiner/Ms Kayla Nisbet) is bred to fly and looks ready to go on debut off two trials; while Queanbeyan filly 5. JESTA DIVA was outclassed a mile in the heavy at Rosehill behind a potential star, and will find this lengths easier from a better draw, and back on firmer footing.

Even and tricky race over the mile where tactics and tempo will have a big say. Kembla 4YO gelding 3. POWER LIFT (Robert & Luke Price/Brodie Loy) can peak here after four runs back getting out to the mile. Finished off okay in a BM 60 behind the smart Heavenly Glory last start, and jockey is having a great run.

MAIN DANGERS: Warwick Farm 4YO mare 5. LADY KIRKHAM (Jarrod Austin/Shaun Guymer) did it tough as an easing favourite third-up this grade at Queanbeyan, but previous two runs here were good, and she's bred to get over further. Local 5YO gelding 1. EAGLEHAWK (Len Hodgson/Ms Kayla Nisbet) has only won once from 21, but placed a further six times, and wasn't far away in that same race at Queanbeyan off a break. Draws well, but sharp rise in weight is a query.

More progressive gallopers here over the staying trip, and there's several hopes. Moruya-based 4YO gelding 5. TRIBBIANI (Matthew Dale/Aaron Sweeney) is the weighted runner down 1.5kg off a BM 58 win at the Sapphire Coast when hard in the market. Hasn't raced over this distance since last May, and taking on some better ones, but he's lightly raced and still on the rise for leading stable.

MAIN DANGERS: Rosehill 5YO gelding 1. HOTEL AMOUR (Richard & Michael Freedman/Tom Sherry a2kg) hasn't done much in two runs back, and has to lump a big weight, but drops back from deeper races. Won two straight last winter coming from well off the speed, and gets out now to a more suitable trip. Form rider's claim could be crucial. Local 7YO gelding 6. TRYING (Norm Gardner/Blaike McDougall) has been up for a while, but looks ready for the rise in trip off a solid closing effort behind Heavenly Glory a fortnight back, and drops 2.5kg. Local 4YO mare and stablemate to top selection 2. DARK CONFIDANT (Matthew Dale/Chad Lever) didn't run on third-up in much tougher company at Randwick, but hit the line hard in previous two. May still be one run short up a hefty 6.5kg and jumping to this trip, but has quality. Improving 4YO Warwick Farm gelding 3. SHAKE ON IT (Richard Litt/George Wood) landed the prize fourth-up over this distance in a thinner race at Bathurst, but will have to progress even further to win this. Warwick Farm 5YO gelding 4. EDEN VALE (Mark de Montfort/Ms Jess Taylor) has a poor winning strike rate, but finished less than three lengths from well-regarded Merlinite at Kembla two runs back before just missing in a BM 58 at Bathurst when well supported.

Good quality and challenging sprint, with a few first starters on show, but the Sydney raiders appear to have it. Emerging 3YO Warwick Farm filly 4. DEEP CRYSTAL (Matthew Smith/Blaike McDougall) is bred to fly, and looks well placed at third start for smart metro stable. Was heavily backed when over-run late after leading in a stronger maiden at Canterbury last start, and little drop back in trip and firmer ground here are big plusses.

MAIN DANGERS: Debutant 3YO Randwick filly 9. ABSOLUTE PUZZLE (Rubick x Without Exception by Flying Spur for Gai Waterhouse/Lee Magorrian) has spent a tonne of time at the trials, winning her latest over 1045m showing good speed despite over-racing and not settling early. Has plenty of raw ability, and the stable loves bringing its youngsters to Canberra. Rival 3YO Randwick filly 7. ENAMOUR (John O'Shea/Tom Sherry a2kg) is also a threat from a good draw, and a nice trial win over Empress Bea who has since scored a dominant win at Gosford. Previous form at the provincials had been mixed, but she'll find this a bit easier. Warwick Farm 3YO gelding 2. REBEL BRO (Matthew Smith/George Wood) is a stablemate to top selection, and can run a race on debut despite drawing wide. Has been close-up in two recent trials, and the blinkers are on. Another debutant 3YO Queanbeyan gelding 1. RADIOHEAD (Verrazano x Street Spirit by Street Cry for Mick Smith/Ms Ellen Hennessy a3kg) steps out off two impressive trials, winning the latest in fair time. Plenty behind him go around earlier so the form reference will be there.

My Betting Attack: DEEP CRYSTAL to Win and Box Exacta 4,7,9

One of the hardest races to dissect on the card. Warwick Farm 3YO filly 12. POCKET MISSILE has made a very encouraging start to her career, finding the line well in three runs, and can peak here over a little more ground. Any track downgrade is a further plus.

MAIN DANGERS: If 4YO Warwick Farm gelding 3. MONSTROSITY (Joe Pride/Chad Lever) can get across to the front early enough from a wide barrier, he'll be hard to peg back despite the big weight. Has battled on okay after leading in both runs back at Wyong and Newcastle, and will find this a bit easier. Randwick 3YO filly 11. MISS TWILIGHT (Peter Robl/MsCeejay Graham a0kg) improved significantly second-up to hit the line in a maiden here, but has to overcome a tough draw. Watch the betting on another Randwick filly and first starter 10. MADAM SECRETARY (Snitzel x Senator Beck by Artie Schiller for John O'Shea/Cameron Noble) who was pushed out to the line in the second of two recent trials. Include both third-up runners, 3YO Warwick Farm gelding 6. WICKED WILLY (Richard Litt/George Wood), and 5YO local gelding 1. KATATONIC (Ron Weston & John Nisbet/Jeff Penza), in wider exotics.

Progressive 4YO Warwick Farm gelding 1. CLASSIC GAMING (Ciaron Maher & David Eustace/Brodie Loy) draws to get plenty of cover, and is the one to beat third-up, despite climbing to 61kg. Scored a dominant fresh win on the Beaumont track before working home from well back in a deeper race at Kembla when well backed.

MAIN DANGERS: Rival Warwick Farm 4YO 2. CANYONERO (Richard Litt/Tom Sherry a2kg) finished off nicely in a smarter Class 1 at Gosford when well tried at each-way odds, and took on tougher grade late last year. Capable 7YO local gelding 5. YOUR KNUCKLESHIP (Keith Dryden/Blaike McDougall) disappointed second-up here when hard in the market, but has enough ability on his day, and yearning for the step up in trip. Nowra 4YO mare 8. VALACHI (Robert & Luke Price/Ms Winona Costin) defied her unwanted huge price here last start, hitting the line nicely after being slow away; while 3YO home track gelding 4. CYBORG (Norm Gardner/Brendan Ward) scored a surprise maiden win at big odds third career start, and while this is significantly tougher, stable knows how to place them.

My Betting Attack: CLASSIC GAMING to Win & Quinella 1 and 2

Another super competitive Federal feature, with a stack of chances, headed by smart and improving 6YO local mare 12. KATHAIRE (Joseph Ible/Blaike McDougall) who came from a mile back third-up in the Federal here a fortnight ago, and ideally suited getting to this distance. Stormed home to win a handy Class 2 at Wagga first-up before chasing home two talented mares at Warwick Farm.

MAIN DANGERS: Progressive 5YO local mare 6. POLYXENA (Rob Potter/Brodie Loy) can strike after beating all but the winner in that same Federal. Draws to get plenty of cover, and normally is a peak second-up performer. You are never quite sure which 5. YOUSAY BOLT is turning up, but after finally getting back to winning ways storming home to claim that most recent Federal, the 5YO Albury mare can go on with it, although from a wide draw, she'll need plenty of speed on up front to get over the top. Home track 4YO gelding 4. HIGH DUDE (Gratz Vella/Richard Bensley) dropped back from an average run in this grade to claim the Tumut Mile beating Jungle Edge who then won a BM 58 easily at Wagga. Draws to get a nice trail just behind the speed, but up 3kg in weight. Local 6YO gelding 1. SUPREME POLARITY (Nick Olive/Cameron Noble) has plenty of quality over this trip, and stuck on well in a BM 72 at Canterbury two runs back. Gets a little drop in grade, and drawn okay, but almost looks weighted out of it saddled with 63kg and no claim. Another local, 4YO mare 11. MOOKAREENA (Barbara Joseph, Paul & Matt Jones/Tom Sherry a2) was also good late resuming in Yousay Bolt's Federal, and drops in weight after rider's claim, but second-up form is not as strong.

Strong and open race to close the card. Keen on improving 4YO local mare 6. FLORA BEL (Norm Gardner/TBA) from an ideal trailing draw late in the day. Hit the line hard resuming in that deeper BM 70 Federal behind Yousay Bolt, and won her only previous second-up run.

MAIN DANGERS: Talented 4YO local mare 11. VELVET AEROPLANE (Matthew Dale/Ms Jess Taylor) was well tried first-up in a Highway at Randwick, but no match for high class and dominant winner. Better suited here over this trip, but will need plenty of luck from the wide draw if they choose to push forward. Consistent 4YO local gelding 4. MAJOR TIME (Gratz Vella/TBA) rarely runs a bad one, and was only collared late in a BM 65 last start when finishing through inferior ground. Not convinced, though, he'll run out a strong 1200m. Another one trained on the track, 7YO mare 14. BID OF FAITH (Doug Gorrel/Ms Ellen Hennessy a3kg) looks well placed down in weight and drawn well off a strong closing run in weaker grade at Wagga