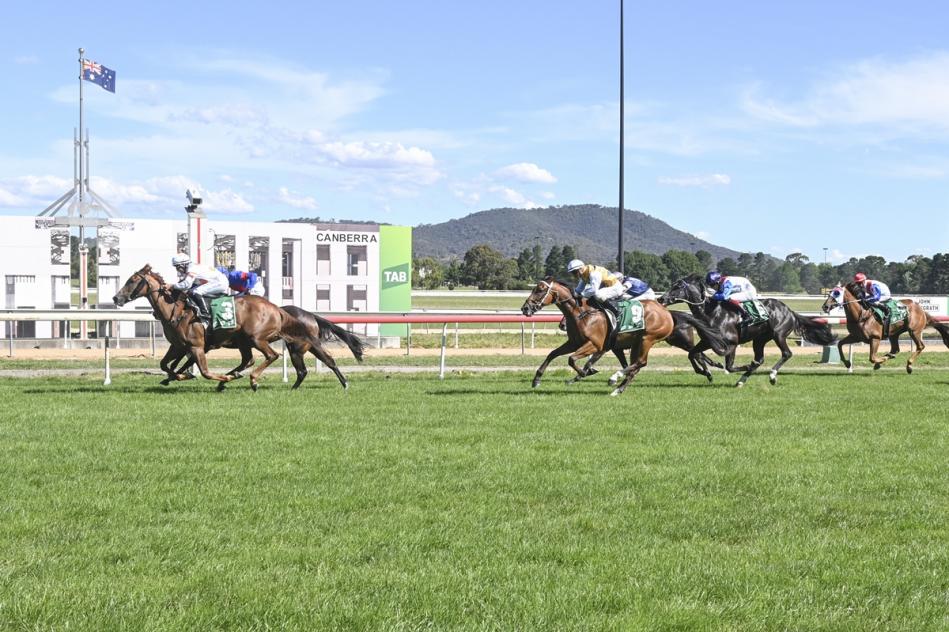 Starting on a Good 4, the track was upgraded to a Good 3 following the running of the first. Both Mathew Cahill and Amy McLucas rode trebles with a locally trained mare winning the Federal.

Locally trained mare EVANORA was solid in betting $6.50 and found the leader’s back in running after jumping well from barrier 2. Cahill stalked the leader throughout the race before darting along the rail to in nicely by half a length. ROMEO VELLA closed off nicely for second after being momentarily held up in the straight, while JAC THE GREAT made up a stack of ground down the outside, coming from the rear of the field to grab third. Odd-on favourite WINNING BUSINESS $1.90 led the field before fading in the concluding stages to miss the top-four.

EXTRAVAGENT LAD $3 made it an early double for Cahill. The Xtravagant gelding jumped well but was racing keenly mid-race, with Cahill eventually getting him settled passing the 600m. He strode up to take the lead shortly after straightening and responded well to Cahill’s urgings, holding the lead to get the win. PRINCESS SPICE $10 was gallant in second, leading throughout and fighting right to the end, while $2.20F PER IVY run into third, with a three-length gap back to fourth.

STREET CRED $8 lobbed in one-out-one-back position in running but found himself some 3-4 lengths off the leaders down the back straight as they dashed away. The leader’s tired and Amy McLucas had taken the lead by they time the field straightened, still under a strong hold. He kicked away when placed under pressure with 300m remaining and was strong through the line, holding off $3.20F SPROUT WINGS who had followed the winner throughout the race, but couldn’t peg back the margin in the straight. There was a long gap back to FOX BEAT who ran on well from the rear of the field to finish third.

YESTERDAY’S GONE bounced well as the $4.60EF and was able to enjoy an economical run on the pace under Mathew Cahill. The mare obtained cover from the 600m point, with Cahill shifting across heels to be out near the centre of the track as they straightened. She sprinted well in the straight to hold off HOLLOW DOLLAR $4.60EF who made a stack of ground in the straight after settling back from the wide gate. Keith Dryden-trained debutant LOCKUP THE KITTENS turned in an eye-catching run for third as the $41 outsider of the field. He may be another one to keep an eye on going forward.

Sydney-based KYALLA $8 broke well from an outside gate and was able to cross to the rail with relative ease passing the 1000m point. She got cover around the turn before coming off the leaders back and mounting a challenge as they turned into the straight. She got to the lead with 250m to go and shot away over the final stages to win impressively by 3-1/2 lengths over OAHU GAZE $15 who continued his solid run of form with another placing. Heavily backed favourite SANTORINI SUN worked home well down the outside but couldn’t reel in the winner in a blanket finish for third.

It was a Canberra-based trifecta in the federal, with Matthew Dale’s competitive mare MEG justifying her $3.70F quote. She was last of the field passing the 600m point, but Amy McLucas remained cool as she began rounding the field with the mare still under a strong hold as they straightened. She quickened nicely down the outside, but EXOTIC DEEL $4.20 didn’t go down without a fight. After sitting on the pace throughout, she took the lead with 200m to go but couldn’t hold off the winner. BALONNE $9 ran his usual good race, charging home from the back to keep his consistent record intact.

THE UNKNOWN FACTOR $8 settled toward the rear of the field from the wide draw, but Jordan Mallyon eased the gelding to the outside as they straightened, and he unleashed a brilliant sprint. He shot away when Mallyon applied the pressure, pulling away to win easily by four lengths to COLONEL $5.50 who stuck on gamely for second after racing wide throughout. Hearty mare CALESCENT was never on the track but she went down fighting to hold onto third. Race favourite MR MAGICAL $4.20F couldn’t sprint with them and finished nearly 6 lengths away.

DEVINE FUTURE jumped a well-supported $3.10 second-favourite and landed in the perfect spot on the back of the leader and favourite. Adrian Layt stalked the leader throughout before coming off heels at the top of the straight, taking the lead passing the 200m point and pulling away to win easily. Sydney-trained MY SNOW QUEEN $2.35F set the pace and stuck on well under the top weight to finish a clear second ahead of BUDDEROO BLITZ $7 who was flashing late and is a horse to follow stepping up in distance.

Former Kiwi FLEETWOOD MACA was heavily backed into $1.80F and lobbed in a terrific spot on the back of the leader. Brodie Loy was held up upon straightening but got the gelding into clear air with 250m to go, reeling in the leader and getting the win by a length over the John O’Shea trained KING OF SPADES $7 who had taken the lead early in the straight. The son of Xtravagant has been sent to the paddock following yesterday’s effort, but he’s one to watch when he returns in the new year. BELLA VIOLET opened as favourite before drifting to $3.50. She continued her good form and is one to keep following.