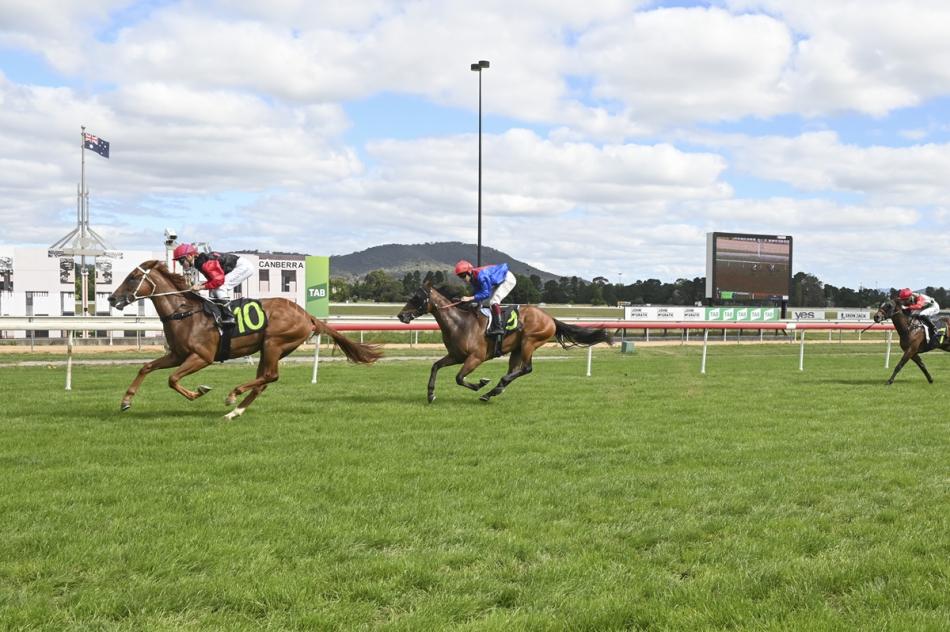 BROTHERS OF ANTRIM (1) ran a clears $1.75 favourite and got home by a half-length. He was 3 wide early and then worked so sit one-out-one back behind the veteran BYBLOS BOY $12. The latter gave a strong kick in the stretch but looked covered a fair way out.  LINDEN (5) $4.20 was 1.57L away in third and was a notable drifter. She missed the start and commenced a long forward run from the 600m to be widest on turning within range. Finished doggedly and it was a decent effort in the circumstances. The winner was too good and can go on from this.

The top 3 in the market made the trifecta with the hot favouite ONE POSE $1.90 having to settle for third beaten 1.7L. WILKSHIRE $6.50 took it out making sharp improvement freshened 5 weeks. He was beaten for speed and positioned midfield on the rail. There was plenty to space to come through early in the straight and he kept coming to win comfortably on the line. I LOVE LUCY was 1L away in second. The filly was presenting off a 7-week freshen and sat comfortably outside the leader. She looked the winner at the 100m when she got the better of ADD ON $9 who’d kicked in front.  The favouite positioned one-off-the-rail behind the speed. She looked right in it on turning but spoiled things by hanging out on the turn and in the straight. The finish was good when she got things together. Worth another chance.

CHARLEMAGNE $4 was a drifter but got home by 0.7L from an outsider TRADE STATEMENT $41. The $2.25 favourite THE SEEKER was well beaten, and rider Spriggs said the gelding raced “disinterestedly” No abnormalities were found post-race.  The winner settled rearward, and Loy eased him out to position widest on the turn. The nice moving gelding came determinedly and go the better of the two inside him in the shadows of the post. That pair Trade Statement and DIME $15 shared the speed and were still clear at the 150m. Both showed good improvement and didn’t shirk their task.  RIVER SAM $9.50 worked into third and was three-side all the way.

An open contest and TRUST THE PROCESS $6.50 appreciated the drop in grade scoring by 0.8L from THE GRUNDLER $4.60 with a gap to DENMISS $5 in third. THE $3.90 favouite CALL ME ARTIE was very disappointing, and no excuses could be found post-race. BALONNE was well-backed into $5.50, and he also finished well back. He was slow away, pulled hard early and raced three-wide throughout. The winner lopped along at the back of the field. The gap opened as they settled for the run home on straightening the long strider got the better of The Grundler inside the 100m. The latter travelled nicely in third one off the rail. He fought hard but found one too good.  Denmiss had

This was a tricky affair and BOBBY IS KING $3F and DIJON $3.60 were clearly the best bet. However, it was the third-elect and drifter REACH FOR GOLD $8.50 who got the chocolates by 0.6L from the latter. Dijon led from the low gate and Reach For Gold pushed forward before the 600m to sit on him. This pair held a margin on turning with the latter finding the margin close to home. MRS GLOOP $11 just held third ahead of Bobby Is King. He settled back and was doing his best work late, although well beaten. On-speed was the go in this contest.

There had been a wrap on the Pepper-trained local OPAL RIDGE, and he was heavily bet to start the $2.50 favourite. The money was spot on with the Rubik filly winning comfortably from the Sydney-trained MRS PATMORE. a $4.40 firmer, with a 5.13+ gap the rest headed by VADERZAN $20 and GOLDEN PASSPORT $4.20. Four runners vied for the lead and Opal Ridge settled off the rail behind them in clear air. She was cruising before the turn and on rounding laid in on heels of the runner-up Miss Padmore, who’d raced in the leading division. The winner is still new but is a nice mover and was much too good on the line recording an impressive win. Vaderzan was held up rounding the home turn and until passing the 200m so there was some merit in the effort. Golden Passport lacked early speed and raced midfield. Was putting in the big strides late and will be suited over longer. The winner is promising and can go on to better things.

With bot favourite Ten Bells scratched at the barrier it was $5 the field with the honest MAJOR TIME $8 coming away to comfortably deliver his fifth win. The second-placed and $5 favourite RAFHA’S CHOICE led easily but raced hot and Major Time stalked. These two settled down to fight it out with Major Tom getting the upper hand at the 200m. There was merit in the effort of Rafha’s Choice who wouldn’t settle having his first run for the barn and no doubt that will be worked on. MAD AS ZARIZ $9.50 and ONSETTLING DOWN $41 ran on okay but never looked like winning. On-pace proved a good place to be.

SUPREMO $1.50 started a prohibitive favouite but could only make fourth beaten 2.39L.  The Snowden-trained CRIME SPREE $4.20 was clearly second-elect and added to the stable’s impressive Canberra delivering an impressive win.  He missed the start by 3L and tailed the field, at least 10L from the leader at the 800m.  The long strider started a run at the 600m and Penza had him widest on the turn. He belted home to beat RIBEAUVILLE $14 by 1.34L and was much too strong on the line. DESTACADO $17 finished it off okay in third.  Supremo led and was clear as they turned and set for home. He fought bravely but they got him at the 75M. Crime Spree had these well covered and expect hm to be even better over further.