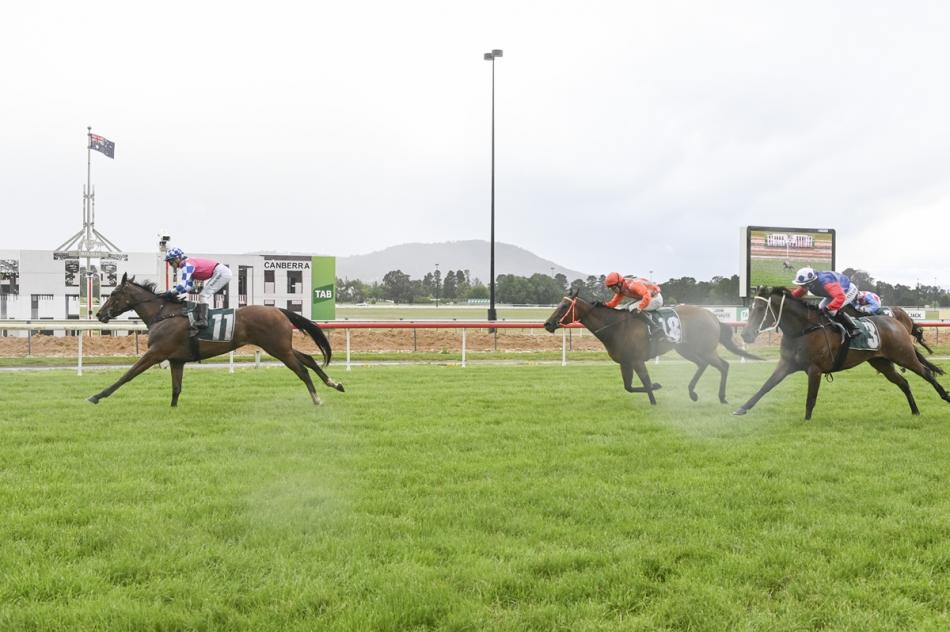 They raced on a heavy 9 and several fields were thinned down by scratchings. Wet form obviously came into play and generally it was survival of the fittest. On pace and working away from the rail entering the straight was advantageous. Only one favourite won on the day and that was the standout in the 3-horse opening event.

Just three runners. EVENING STAR $1.7 was much too good on debut for a sharp Sydney barn owning a Rosehill trial win. Went to the front and never looked like being beaten. OLD NEWMARKET $2.60 tried hard on debut but the 4L gap to the winner said it all. NO NAY SELL $7 dropped away when the pressure went on beaten more than 10L. Evening Star had the easy kill, but this was no guide to his prospects in better company.

ZOOMURUDI ran the $2.90 favourite but came in last beaten more than 30 lengths. 31L. He led at a good clip with pressure and was a beaten galloper before the turn. URJUWANN $21 took out the race and it was a good effort. He was up from the mile and rock-hard fit. She was in the last pair and a mile off than passing the 800m when she began to improve along the rial. She worked out to be widest of the leading division on turning and under the urgings of the handy 2kg apprentice finished the race off doggedly to win by 2L. AFFILIATE $5 looked the all over winner entering the stretch a clear leader. She has been beautifully positioned in the run and gave her all. GILDED CROWN $9.50 raced in the second division and was 2L behind the winner on turning. He took a while to wind up but was doing good work on the line to just miss second. LIGHTS ON THE HILL $6 looked to have very chance in fourth but didn’t see it right out. THE CARPET BAGGER $4.80 sat outside the but it told, and he had nothing left on turning. Good efforts the three placegetters, especially the winner.

The market gave three Sydney horses winning chances and it was the Maher-Eustace-trained ELARSKI $4.60 who proved 2.8L too good. The favourite UNCAGED $3.20 took up the leader role. She led by a couple of lengths on turning but they were lining up wider on the track and was soon under pressure. The impressive winner Elarski sat three wide mid-field with cover and moved into it stylishly at the turn. The nice striding galloper came down the middle and wasn’t put under any pressure to win easily. AYE DARBY $15 had sat back and tuned wide behind the leading bunch. She ran on stoutly to place second. MINI MAYA $81 showed more pluck that the others placing 3rd just head of the tiring Uncaged. DECISIVE MOVE $3.60 was wide all the way from the cruel barrier and was entitled to drop out. Elarski is one to stay with from a future viewpoint.

ALLGEMEINE (11) debuted for Matt Dale owning a trial win and won comfortably a firming $4.20. The filly sat midfield the rail and on turning Nisbet elected to stay inside. She still had work to do at the 200m but despite running out the nice strider had a bit on these and came away. HAYYU’s $26 effort to finish second beaten 2.3L was big. She jumped from a wide gate and had to work over to lead. She settled well under Loy and was still in front passing the 100m. It was a stout effort. Both KHUMBU $9 and COOL ENCOUNTER $4.80 finished the race off okay. The former has sat on the leader’s flank and wanted to run out in the straight. The latter had been wide with cover and tried hard when the split came. The favourite GOLDEN CHANCES $3.80 settle back on the rail and was brought wide on turning. Was doing good work late but couldn’t get close.

UNIQUE PRINCE ran a $3.60 favourite but had to settle for fourth beaten 2.7L. I’VE BEAN TRYIN’ $7 took the race out comfortably building on his Maiden win at the previous Canberra meeting — on a good track. On the quick back-up, JACK THE BRUMBY $4.20 worked to set up a big lead and still had a few lengths on them on turning. He still had a gap on them on straightening. He was grabbed inside the 100m beaten 2L and it was a plucky effort given his early exertions. I’VE BEAN TRYIN’ impressed. He settled back and was brough wide on the turn with plenty in front of him. Martin went for the gaps on the inside and he sprinted home for a clear win. SISSECK was backed $18 -8.50 suggesting something was on. Sat behind midfield 3 wide and was in striking range on turning. He kept coming in an encouraging effort. UNIQUE PRINCE was given a good ride midfield and turned second in the middle of the track. He looked a live chance but was inclined to run out and just lacked a finishing punch. Good efforts the first four home but all honours with the winner, who has a sharp turn off foot.

PROPOSE TO ME went around a clear $2.80 favourite in the Federal but was beaten nearly 6L after missing the kick and racing wide after. There was less than 1L between the first 3 home with TOBERMORY $12 causing a minor upset. The winner trailed behind the leader and travelled well. He worked off the rail prior to turning and was briefly held up before finding a split. There were three chances at the 75m and Tobermory toughed it out best. MILMOO $5 and NIECES AND NEPHEWS $6 both fought hard. The former sat three-wide close-up behind the former who sat on the leader. There was nothing between the trio as the whips began cracking. The rest never looked likely. ASSAULT ‘N’BATHORY $5.50 led and folded up. Not the strongest Federal and no recommendations.

It was $5 the field with the favourite well-beaten. RAPIDITY had firmed into $7 and won the race in a ding-dong go, and He resumed in good order at Kembla Grange and built on that. A bunch went hard early, and the winner got the nice sit on the rail behind. She had a wall in front of her on turning but got the split at the right time. There were plenty of chances at the 200m but three came away with Rapidity just proving best. Second placegetter CRUCIAL WITNESS $21 was a $12-21 drifter but defied that slide. She trialled behind the leading pair and had a bumping dual as they straightened. The two inside her used the cutaway leaving a gaping hole and she was brave despite wanting to run out. The favourite GIRLS ARE READY $5 had a soft run mid-field and was wide at the turn. She finished strongly and can be followed. SHENANDOAH $5.50 raced very keen early and finished it off okay without ever looking like winning.