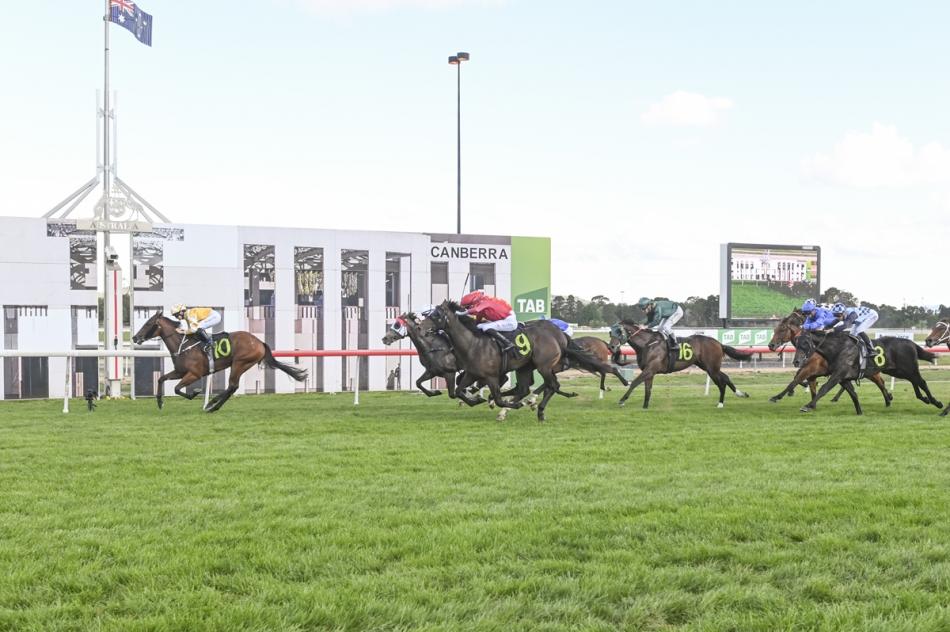 They race on a Soft 5 but some hoops suggested it was racing firmer. They won from the front and the back, so you’d have to say it raced fairly. The Black Opal winner Queen Of The Ball was impressive and stand-out wins were also recorded by Gusonic, Cavalier Charles, All Astern and Manderboss. All can be followed with confidence. Willy Pike had his first rides at Canberra and went home with three winners, all classy efforts. Tim Clark got a double and always performs at the Opal carnival.

A thrilling finish in the first with the local (Norm Gardner-trained) DEVINE MISS $7 coming from the back to get up right on the line. It was some effort. The filly raced three and four wide midfield and was last and widest on turning. She absolutely belted home to get-up by a nose from FLEUR DE ROSE $31 and FLYING ANNIE $6.5 with a lip separating them. This pair had shared the lead and showed dogged qualities. Not sure what to make of the run of the favourite GLAMOUR RUNS DEEP $2.1. She was a little slow away from the rail and Berry pushed her through to sit behind the speedsters.  Flying Annie left the fence on turning but Glamour Runs Deep didn’t have the immediate zip to take the opportunity. Then there was some scrimmaging with fourth placegetter AS YOU WERE $4.2 getting up on her inside, and the mare had no luck thereafter. Forgive. The winner is lightly raced and was presenting off a 13-week spell. On this effort she will be winning better races.

The Wizard from the west, Willy Pike, kicked home GREAT MYSTERY $8,50 — and the filly was the first of three winners on the card for the star hoop.  LET'S KARAKA DEEL drifted late to start 1.80F but was bet the exclusion of all others and was beaten 3.5L. Great Mystery lobbed along behind midfield and was back and widest on turning. He ran on powerfully and withe Pike leaning forward in characteristic style gathered in BRAVE BOY $10 right on the line. The latter lived up to his name. He sat midfield on the rail but was extricated nicely before the turn and straightened four-wide within reach. He looked all over the winner before the winner pounced.  Stablemate SKY ACE $19 led on the rail and stuck on well in third beaten 2.4L. GALIERRO $7.50 was forward and widest out of the first turn and Hutchings elected to push forward and sit outside the leader. He went early, and ran around a bit in the stretch, and it wasn’t a bad effort. Let’s Karaka Deel has a soft run midfield, one off the rail. He turned four-wide but met trouble on a couple of occasions after and couldn’t gather the momentum required.  He will be better for that outing and will keep.

Favourite backers were finally rewarded with GUSONIC $2.80 saluting in the third. The Albury-trained gelding was well-bet and held a 1L advantage on the line. Clark shot him straight to the lead with the riderless horse Sir Finn thereabouts, after losing Krogh on jumping. He was four lengths clear at the 600m with MR ALOYSIUS $15 leading the chase. He closed late in the straight, but the winner held him on the line. He’ll be winning soon. EMMA'S GIFT $6.50 got nice rails run behind the speed and had every chance in third beaten 3.3L. The winner is a nice galloper and can go on from this.

CAVALIER CHARLES was backed into $3.90 favourite and got the job done for the Matt Dale barn and five horses finished within inside 0.76L from the gelding. His effort was huge. He was slow away and settled last in a stretched field.  He was wide on turning and wasn’t sighted until inside the 100m when he absolutely flew to swamp them recording one of the wins of the day. He’s a nice galloper who had really coming into his own. Had come off a 4 week freshen and is sure to be winning again. PARK AVENUE $4.40 got a gun ride from Clark as expected positioning nicely behind the speed. He had it won everywhere but the line. MAJOR TIME $13 sat outside the leader and hit the front at the 200m. He always puts in, and it was a terrific effort to be beaten 0.4L in third.  There was a line of them threatening outside him. EYE SEE THINGS $8.50 was right in the firing line but was restrained inside the 100m and not ridden out finishing eighth beaten 2.24L. A good race but honours clearly with the winner.

Nick Olive-trained ALL ASTERN delivered Willy Pike’s second winner for the day. The filly was bet $5-$3.80 and burnt turf to lead from the side barrier. She turned for home well clear being cuddled along by Pike. It was soft on the line easily holding the best of the finishers HOW DO YOU SLEEP $10 and MY GIRONA $12. The debutant and favourite JIGGLER $3.5 was doing his best work late in fourth after settling well back in the run. All Astern was much too good and is another nice prospect for the sharp local barn.

DUCHESS was the least fancied of the Richard and Michael Freedman pair and defied a $6.50 - $12 betting drift to win by a whisker from the local Norm Gardner-trained local DELACOUR $9. They settled 1-2 in the run in that order, and they ran along. They settled into a ding-dong go all the way down the straight with either giving an inch. Delacour closed late but was just denied. LANCASTER BOMBER $7 sat just forward of mid-field and got a nice run through on the rail. He didn’t shirk his task and was closing on the line beaten 1.7L a lip ahead of the favourite KEY LARGO $3.10 and his was an effort to note. Settled second last and wasn’t in it on the turn. He was held-up on straightening and belted home down the outside. No luck and he will keep. ON THE LEAD $5.50 finished on okay. The runs of the first four home were all good from a future viewpoint.

The two best supported runners were unplaced in a messy race where they positioned in bunches early. AIM $5 was slow away and couldn’t muster settling last. CHAT $4.40F also settled back. He was in reach on turning but lacked a killer punch beaten 2L. The winner IRISH SONGS $7.50 got cover midfield three wide and had a wall in front of him at the 300m. Berry was patient a nice run midfield and found a slit just after the 200m and he finished too strong beating ASHMAN $5 by a half-length. The latter led from the get-go well-managed. He gave everything only to be run over in the shadows of the post. The local MAD AS ZARIZ $31 ran out of his skin. Settled behind the leader and gave everything to get past him. To be beaten less than a length forced to cross from a wide gate says everything. MARNIX $9.50 first-up was putting the big strides in late and that needs noting from a future viewpoint.

QUEEN OF THE BALL 2.80 justified her favouritism with a dominant all-the-way win. King blasted her out of the wide gate, and she was leading into the first turn. In the straight she burnt off the immediate challenger — the well-supported debut CUSTODIAN $3.90 — who had sat right on her in the run and from then on it was clear sailing. WARBY $11 settled well back and finished hard down the outside on debut and the Maher-Eustace trained colt has a future. He finished better than METALLICITY $4.20 who had to race three and four wide and was still coming: running around a bit at the business end.  NOLEN $19 defied his odds beaten 1.4L. Pike settled him behind the speed, and he stuck on well on the rail side.  Despite working early, Queen Of The Ball didn’t give them a chance and bigger races are in store.

The local MANDERBOSS is progressive and was much too good for this line-up. Bet $6 - $4.20 he mucked the start and settled last in a strung-out field, and they ran along.  He was last and widest on turning and under Pike came with a withering run to win by 2.5L easy. He’s nominated for the Australian Derby and that would have been a clue to the stable’s belief in his ability. Regarding the rest the field tightened as they set out for home on and LOOSE LOVE $11 emerged as a likely winner and was clear in second clear of ALMAHERO $5 who battled on in third placing. Nothing was emerging from further back. PINK PANTHER #.5L favourite had led and won by spaces the two prior but took a sit today and was under hard riding before the turn. She had a slight bump after the 200m but wasn’t racing like a winner and was eased out of it. Issue? Just one to stay with out of this race: Manderboss