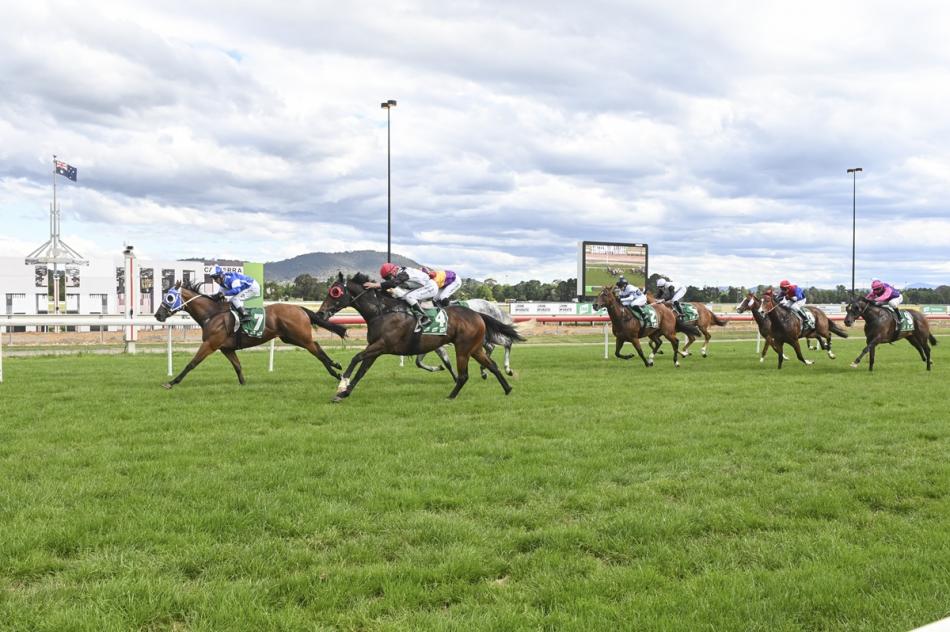 Remarkably they raced on a Soft 6 with the course proper again showing the benefit of a break from racing. It raced fairly for those with the horsepower. Jack The Brumby’s big win and the remarkable effort of Allgemeine in the final race stand out most in the mind. Apprentice Amy McLucas rode a double.

The money came for SALLY POPS $2.15F and the Sydney mare was far too good. She brought solid efforts from stronger races and was at home on the soft track. She had an easy time of it, midfield on the rail and was behind the leader on turning. She had to push her way clear on straightening and was coming hard at the 200m. She hit the line more than 2L clear of the leader PRUSCINO $2.70 – $4.80. The latter found the front after a brief tussle and had an easy time of it after. She was entitled to show more when collared inside the 100m. Having said that, she still finished well clear of the resuming BELLEISTIC LAD $24 - $18 who ran on solidly from the back and will naturally be better for it. DIAMOND CLASS $3.60 made up some ground in fourth but was well beaten. The winner found the right race.

BET RED $1.85 had been racing in better company and ran a clear favourite and got the job done. He settled on the rail a few lengths behind the leading pair. She came off the leaders heels as they set off for home and held a 0.79 margin on the line from WOULD BE KING $8. His was a decent effort He’d led with no peace and fought on hard to hold off CALL ME ARTIE $9 and SHADDY $4.40 who both ran on. The winner still races a bit new but has a good turn of foot and can win again in the right grade. The efforts of the three placed behind would have pleased connections.

AFFILIATE raced a $3.40 favourite but disappointed. JACK THE BRUMBY $2.80-$3.90 was having his first run over a middle distance and despite racing somewhat errantly absolutely belted them. He led and then hung out and ran wide until the 1300m when he was brought back to the rail. He was 4L in front at the 1200m and extended that lead past the 600m. They were all off the bit chasing and in a super effort held a 5.5L margin on the line. AFFILIATE $3.40F led the chase but was under pressure from the 600m and was beaten off.  ST ROSE $81 and ELEGANT CARRIAGE $4.60 and UNO TOPS $16 emerged the best from the pack but never looked likely. Any worries that Jack would see out the trip were well-dashed. The gelding will be required to prove its tractability in an official barrier trial before being permitted to race again. Affiliate’s trainer conjectured the gelding may have not backed

DREAM GAME $1.30 started a prohibitive favourite and didn’t deliver the bacon. It was $10 the field the rest with POETIC MISS $11 winning by 1.5L from BRAVE MASO $10 with the favourite just behind in third and well clear of the others. It was a strong effort from Poetic Miss. She had to work early to sit on the leader Hayya. She took over on turning and was always traveling sweetly to comfortably hold off the challengers. The favourite was camped one-out one-back in fourth and at the top off the straight was beautifully placed to challenge. The long strider gave his all, but the expected turn of foot wasn’t there. Brave Maso settled back in the run and her finishing burst to nab second caught the eye.  The filly is a coming winner.  Dream Game had kicked back in the barriers and post-race was found to be lame in his off-hind leg. Poetic Miss will go on from this.

This shaped as a tricky race on paper and so it transpired. TITAN STAR was crunched from $11 into a $4.40F but nothing worked out and after being four-wide throughout was last home beaten 7.4L. ROMEO VELLA $11 took the race out by 0.7L From SIR FINN $11 and SLY SONG $7.50. They ran along and it was bunched at the front end with Starliv $7 leading but hunted along. They spread out at the top of the straight and Romeo Vella forced his way through a gap and did enough to hold off the closers. SIR FINN $21-$11 hit the line hard, and the improved effort would have pleased connections. He was ridden more quietly and had trouble obtaining a clear run until passing the 300m.  Sly Song was three-wide most of the way and ran on.  Not much between the better ones in this contest.

The Waterhouse-Bott-trained KOONDEEMAN $2.45 ran a clear favourite and was beaten 11L. Post-race the gelding was found to be lame in its off-hind leg and the stable representative said consideration would be given to the gelding’s immediate racing future. FINN’S FORTUNE $16 took out the race in a close go with AVIAN CRESCENT $31 and the winner’s stablemate SILVINCIBLE $7.50 1,7L away in third. The first five home were all Sydney trained. The favourite led but not decisively.  Silvincible raced three-wide on the speed and was first to challenge as they entered the stretch.  Finn’s Fortune had positioned midfield and turned four-wide and moved into it stylishly. She held a margin over Avian Crescent who made up a stack of ground. Silvincible held on bravely in third.  The efforts of the first two home were the take-outs from the race.

MISS OSTEND’s scratching took some interest out of the race, and they started $5 the field with punters unsure which way to go. RAPHA’S CHOICE $15 got the nod making good improvement second-up with Jeff Penza in the saddle. They went hard from the gates with the speedy favourite AFFINITY BEYONG $5 holding the rail with CALESCENT $12 widest of the leading trio. She took the lead at the 300m and looked the most likely at the 200m but drifted towards the rial and lost momentum at a key time. Raffa’s Choice got a beautiful drag behind the leading division and the gaps opened and he took every advantage holding off the placed pair MAD AS ZARIS $5.50 and THE UNKNOWN FACTOR $5.50 who finished doggedly. OUTTA REACH $8 was well beaten and had a slow recovery rate post-race. HONEYSUCKLE CHOICE $5.50 was slow away and raced four-wide throughout. Worth another chance. Questionable form moving forward.

The get-out-stakes delivered for favourite punters ALLGEMEINE $2.90 getting home in a blanket go. It was a big effort. She was eased back to settle in the last two and railed a clear last at the 800m. There was a wall in front on turning and at the 250m supporters were starting to sweat. The filly made it a double and has a promising future. EXTRAVAGENT LAD $4.20 sat handy and found the front on straightening and fought like a tiger to just pip EASY ROSY out of second.  Hers was a decent effort. She’s sat forward four-wide throughout and was coming again on the line. Another to follow. ALAN $16 was held up on the turn and the early part of the straight and made sharp improvement beaten 1.4L. This this will be a good form race with the winner super impressive.