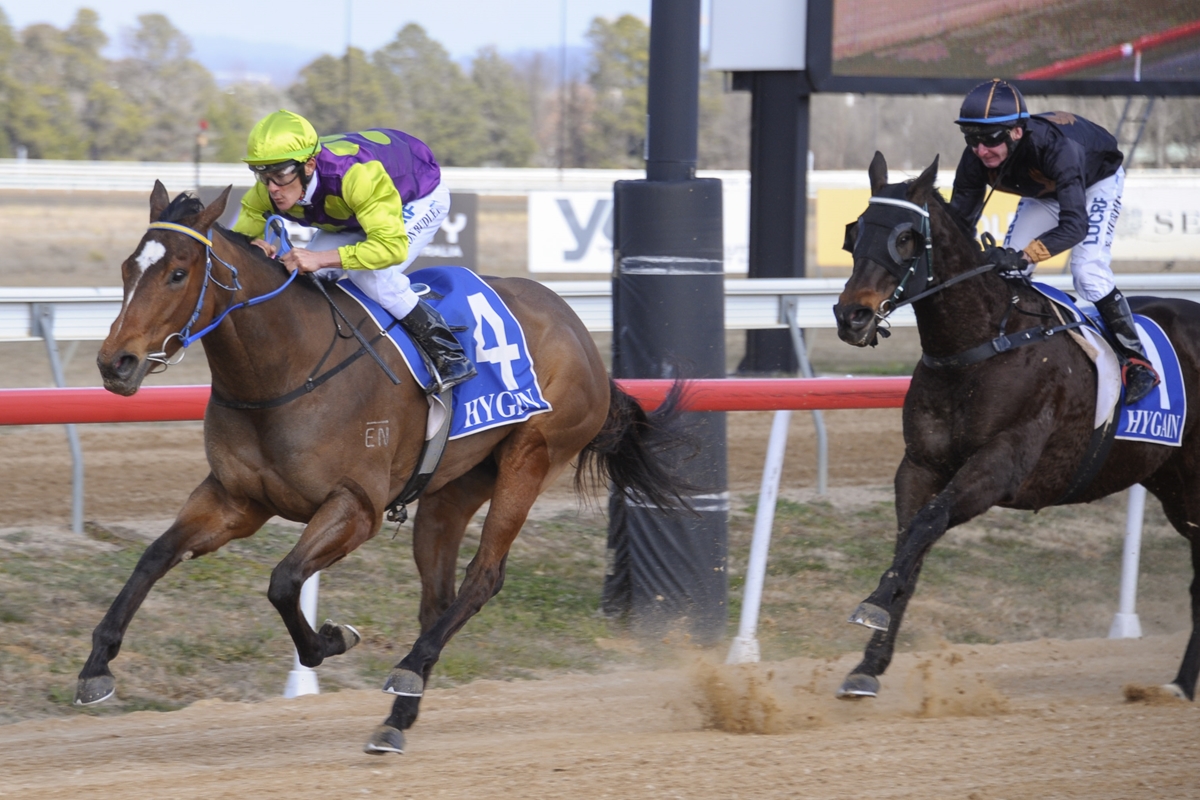 The rail was out 8 Metres the entire. The track was rated a Good 4 to kick off with, but was immediately upgraded to a Good 3. You could make ground. Blake McDougall again took riding honours with two winners and the training honours were evenly shared. Timely Shadow impressed in the last.

LAMINGTON DRIVE $1.7F was the one punters wanted in the small field and he just got in from the Sydney-trained AESOP’S FABLE $6, with INVINCIBLE DASH $4 a couple of length back in third.

The winner made it a double this track and trip and sat off the leader Aesop’s Fable at a leisurely gallop in the early stages. Aesop’s Fable looked to have the winner’s measure half way down the stretch, but Lamington Drive dug-deep under the urgings of McDougall. Tough efforts both horses and Aesop’s Fable will be better for the outing. Invincible Dash gets a pass mark first go at the trip. Alpine King was slow off and pulled during the race.

RED KANZI $6.5 made it a double this track and trip beating the favourite WINDS OF WAR $2.2 by a length with MO MORE CHICKEN $5.50 close up in third. The flop was the well-supported TURFEZE $3.50 who held the rail but was pressured all the way and lost his running at the 150m when weakening. The winner missed the jump by a couple of lengths and that worked in her favour. Winds Of War was trapped four wide throughout.

It was hot upfront and Red Kanzi was kept out of that action. She had plenty to offer on the turn and only had to find a way through to prove hard to beat. That finally came at the 150m and she pulled clear from Winds Of War - who did a big job in the circumstances and should be winning soon. No More Chicken just weakened late and there was plenty to like about her effort as well. All three can go on.

Three were given a chance by the market with DREAMLINER the $1.75 favourite. She was beaten a lip by BROTHERS OF ANTRUM $4.80 who brought a Wagga trial win to his debut. MIXED UP FACTOR $4.40 also had admires on debut but was fractious in the barriers, and wasn’t ridden out in straight with the jockey concerned she was uncomfortable in her action.

Dreamliner worked over and was initially posted three deep before sitting outside the leader. The winner sat just behind on the rail. The third placegetter READY FORA MOET $17 settled last on the rail. Dreamliner took over before the 200m, but the winner was on the scene and these two broke clear. There was only a short half head in it on the line, with more than five lengths back to the rest headed by the leader More To See.  The winner is a nice galloper in the making who is sure to appreciate longer sprints. Dreamliner had to do a bit early and was brave and gets another chance.

There was only 1.8L between the first 7 home and the best-backed runners couldn’t make the placings. The winner OPERA TICKETS presented off a soft track placing at Forbes and beat FLIGHT COMMANDER $10 and KOPAONIK $18 by a length. The fourth-placed DIVINE APPROACH $4.60 protested against the latter alleging interference after the 200m. The winner was held up until passing the 150m. BOLSON the $3.20 favourite was the most disappointing runner beaten 1.8L in seventh and raced three wide throughout. No abnormalities were found post race.

Flight Commander led with Kopaonok sitting on him and Bolson was further out. Opera Tickets was railing right behind them. Bolson weakened when the pressure went on and the other pair looked set to fight it out, before Opera Tickets found the way through under the steady urgings of the 3kg apprentice to hold a clear margin at the post. They were across the track for the minors. Doubt this will prove a good form race, but no knock the winner or the ride.

Punters were reeling again when the well-bet favourite MORE SHOTS $2.45 could only manage a well-beaten third behind the Sydney-trained SUPER SOLAR $6; freshened four weeks off an unlucky country debut. HOYSTRYKE $17 made second beaten more than two lengths. The favourite’s stablemate KIRKTON $4.20 was trapped wide and the stewards queried rider Scorse as to why he didn’t push on and lead. The trainer confirmed the riding to instructions and no action was taken.

There was a bunch of them up front at the 800m with More Shots sitting outside the leader. The winner and second-placed gallopers sat quietly further back in the field. There looked to be plenty of chances on turning, but Super Solo had worked to the outside and dashed clear to win easily from Hoystryke (finished it off strongly) with another gap to the favourite.

Super Solo made sharp improvement over the longer sprint had had plenty of these. He will go on. Hoystryke is knocking on the door. More Shots looked to have every chance and was disappointing when the pressure went on.

Favourite backers put their faith in Gai and Adrian and got back on track when TILIANAM $2.35 recorded an easy win. The stablemate STATE CAPITAL was a drifting $4 and finished fourth. The market got that right. BADEN ROAD $6 on debut and LOOSE LOVE $41, filled the placings.

The winner settled in front from the low gate and at the 600m Baden Road was forced three wide outside the filly after meeting some trouble early. Loose Love got a nice trail behind the speed. Tillianam gave a kick of turning with Baden Road looking the most likely to run her down. However the hard run told at the 200m and Tillianam held a clear 2L margin to the line. The rest were well beaten. The winner looks ready-made and will only be improved. Big effort Baden Road after racing wide without cover and he’s got ‘coming winner’ written all over him. State Capital was wide throughout and a little new and was going his best work late.

KATTEGAT was backed into $2.25F but missed the placings behind the Dryden-trained ELTHAM PALACE. $8.50. He had the figures to say he could win but all of his races had been over shorter sprints and that was a query.

The winner led comfortably from the ace and Kattegat got a nice run behind the two in front racing outside MNEMENTH $7 with TEJORI $8 out a bit wider still. Eltham Palace was cruising at the top of the straight and held a 1.3L advantage on the line over Mnementh who fought hard and with NEWTOWN IS COMING $21, just beaten into third. The latter raced back on the rail and finished determinedly along the inside after being held up on turning.  The favourite had every chance but just battled. The winner got an easy time of it and is a tractable racehorse with plenty of dash.

TIMELY SHADOW (6) was heavily-backed starting $1.85 and proved much too good beating POETIC POWER $7, and with the roughie we pointed to, TRUST THE GUT $61, in third. The second favourite CLEM FANDANGO $4.20 was beaten 4.3L. He was slow to begin and had to be eased over the concluding stages when crowded. The late rider notification for Poetic Power cost trainer Dryden $100 and we presumed her a scratching in the early form assessment.

It was keen up front with  TIZ WAR BRO $21 (4th) leading Poetic Power at a steady tempo. After being crowded on jumping Trust The Gut found a nice spot midfield and the eventual winner settled back on the rail and moved forward noticeably passing the 600m. She was jagged out to be one of the widest on turning. As they headed for home Poetic Power quickly made the front, but once off heals Timely Shadow gathered momentum and zoomed by to win easily from Poetic Power with another gap to Trust The Gut ,who boxed on well. The favourite was simply much too good presenting off better races. Poetic Power is knocking on the door. Trust The Gut is a coming winner back to Maidens.