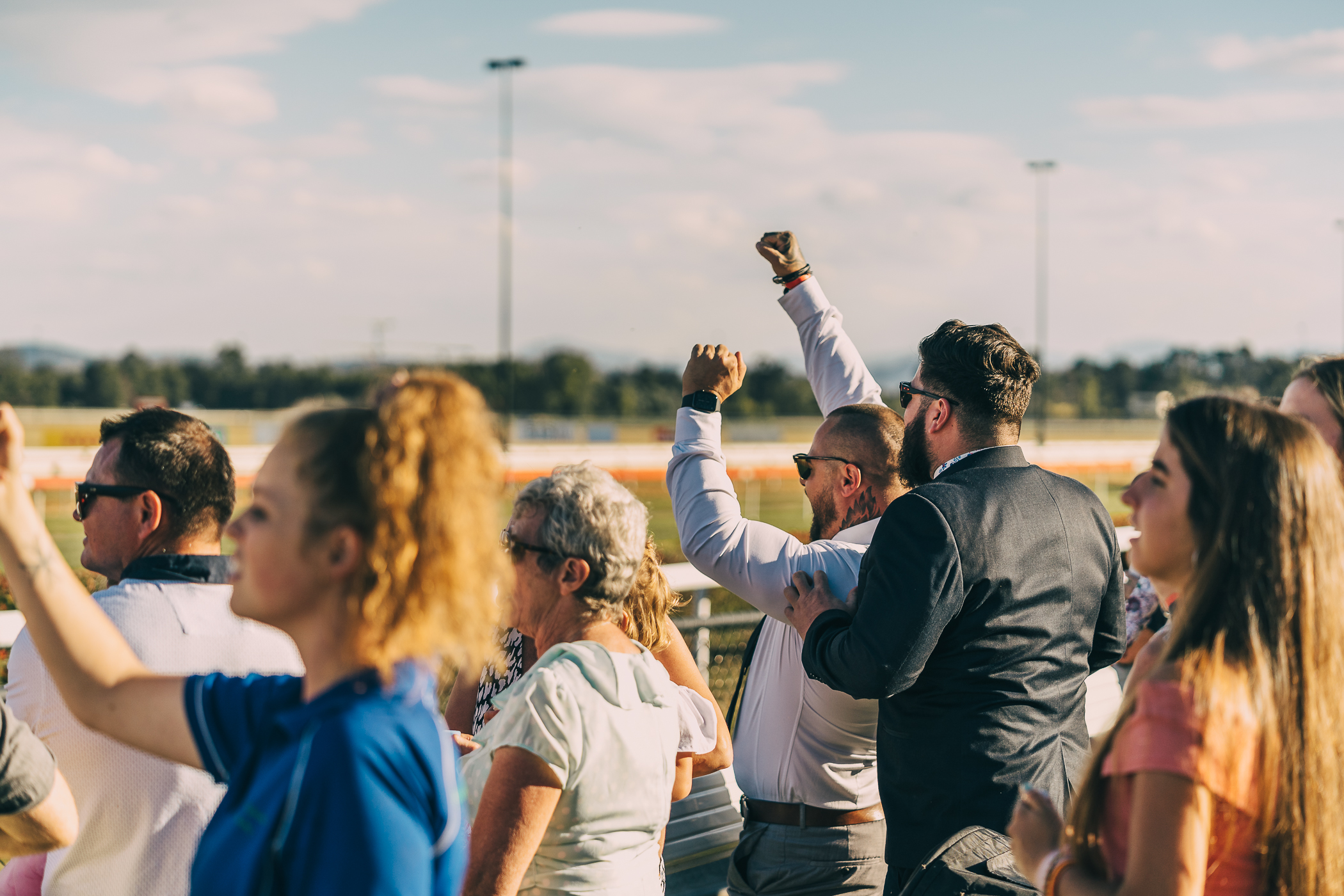 The rail is out 9 metres the entire and the track will present in the good range. A number of leading Sydney stables have horses accepted and are sure to keep the locals and others honest. Good betting races throughout the 7 race card.

The First Ring can lead from Attuned. THE FIRST RING (2) brought sharp trials to the debut at Kembla Grange gelded, and faded from the speed well out of the market. That was on a heavy track and he’s likely to get firm conditions today. In a top city yard and draws to control the race. Expect him to improve quickly and go close. SCARLEO (1) goes wet and dry and missed a whisker here third-up on the deep track, heavily supported. Runs along and keeps the form hoop. He can keep improving and is a serious chance. DELICATELY (6) comes down from Sydney for James Cummings and hasn’t got warm his two race-runs. May sit handier today and it wouldn’t surprise if the filly went much better. ATTUNED (4) is fast and has been going close. The blinkers come off on a 7-day return, but he has to show he can run the 1400m right out. BET: Leaning to #2 The First Ring and the market will indicate his readiness.

Standforthe Anthem will cross over from the wide gate and gets the opportunity to lead. STANDFORTHE ANTHEM (8) will run along and debuted in July last year just beaten at Goulburn heavily-backed . Hasn’t been seen at the races since, but has prepared for this with a Randwick trial win. Gets the blinkers first time and he looks ready to go for a leading city yard. DEAUVILLE (3) also represents a top Sydney yard and will be better for the solid on-speed effort at Newcastle, when he started at long odds. The well-bred half to Hot King Prawn has immediate up-side getting onto a dry track and draws to get every advantage. MANILA THRILLER (12) showed plenty of ability last preparation and resumes for a leading local yard. Is likely to come back further improved and expect him to be right in it with the in-form McDougall sticking. CHATEAUX PARK (2) returns to racing as a gelding and is better than the form line suggests. He rates well off those Kembla Grange efforts and has trialled well in town. He will lose nothing having Loy aboard and looks capable of surprising. BET: The market will be instructive, but expecting #8 Standforthe Anthem to be the one to beat.

There’s potential leaders right across the barriers and they will fly along. PENANG (3) was threatening and made a rating’s spike easily winning the Newcastle Maiden and then competed again at that venue in stronger than she faces today and disappointed as equal favourite on a wet track. She peaks and will runs along from the advantageous gate and expect a bounce on dryer. TEJORI (8) was on-speed winning on debut here by a big space at short odds, and then went to the Open 2 at Randwick and has no luck at all on the heavy track. She has been away for 321 days but it would be surprising if Nick Olive doesn’t have her on song and ready to go. The gate cruels, but she has early tow. ROZBURG (7) was heavily-backed resuming at Gundagai, but got back and was a bit keen. Gets the blinkers first time today and should have the speed to manage the tricky gate. He can be in the finish finding his best. THORN BROOK (9) is a leader resuming and Cahill’s booking is a push. The Maiden win two back was dominant and no surprise if he takes pegging back. ALDASHA (1) had one run last preparation missing a lip at Kembla and was found to have bled. She showed enough in that run to suggest she will be very competitive if presented forward. SELECTION: The Snowdens have a 47% strike rate at this venue and #3 Penang looks just the type to add to it.

Tresse D’Ore and Moss The Boss may be the pair to run them along. CAMP RIFLE (1) improved again missing less than a length from the pace at Kembla Grange in stronger than this. Gets the clear top weight but the blinkers go on first time and he can win for Godolphin at this level. Harder to sort behind him. McDougall gets off the above to stick with SWEET KNUCKLE (4) who resumes for a top local yard. She races handy and is good early in her campaigns No surprise if she’s presented ready and makes the finish. MOSS THE BOSS (8) did about what was expected to resume and can improve quickly up to this trip and has been very competitive in town. The second-up record reads well. TRESSE D'OR (7) was only run over late resuming in BM70 grade at Wyong. He’s trialled solidly in town and was beaten a lip here two back. Expect him to race well. WAIHEKE (2) is the other Dryden galloper and is well up to this. Will race over further but has placed 2/3 fresh. SELECTION: #1 Camp Rifle should be hard to beat despite the big weight.

It’s not clear where the speed will come from, but the large field should run along. SHAIBANAT (4) had some support resuming for Godolphin at Kembla Grange and things didn’t really work out. Had trialled well at Randwick and the back-form reads very well for this. He’s won second up and can deliver with a good ride. KIMMYLEE (9) won here three back on debut and placed twice after making further improvement. Resumes off a couple of trials and the lightly-raced filly is sure to have come on. Looks a live hope. ROCKAROSA (3) is a former Waller galloper back after 15 days for the Keith Dryden yard and finds easier grade. Gets a wide gate but is capable of winning and McDougall’s booking is a positive. CANDY BAR (10) comes to peak for Team Snowden with a weight drop. She’s good enough at best to make the finish. BET: A few chances but siding with Shaibanat.

The Federal looks very open on paper. I AM KALANI (10) comes to peak off two close up efforts in Open grade. Races handy and a form hoop rides first time for the top local yard. She's the starting point in a tricky Federal. BALLISTA (3) ran his best race before the spell winning the Open at Wagga. She’s won 2/5 first up and will be ready to go. The sticky gate shouldn’t bother. GUNDY (7) got too far back resuming at Gosford and was doing good work late. Brought strong form from the previous campaign and has won 2/3 second-up. Looks a genuine hope with Loy replacing the apprentice. SAFE LANDING (6) reaches peak and is better than the form line looks. Gets the weight drop and will use the low gate. Rates well at best and a win wouldn’t surprise. DIVI (9) needs to be considered if the money comes again. BET: #10 I Am Kalani looks ready to win. Looking to back each way.

Echo Lad may get a comfortable lead. WREN'S DAY (3) just ran out of puff second-up as favourite making a jump to this distance range. Was beaten less than 3 lengths the Group 3 at the back of the last campaign and performed at Group level in France. Has trialled to keep ticking over and the winkers are applied first time. Draws well and gets his chance for a leading city yard. LORD TROPICANA (5) is a developing stayer who improved again winning easily at Newcastle. Has been freshened and looks capable of repeating with a good ride from the wide gate. ECHO LAD (4) brought good figures at the mile to the middle distance at Newcastle and pulled up with an issue. Will push forward and lead and will be hard to peg back racing at peak. PRIDE OF KALARU (2) can stalk the speed from the low gate and was tracking well before the Orange failure. Is on the 7-day return and the local won here at his only try this trip. The 4kg claim brings him right into it. BET: Wren’s Day wins this comfortably at best and should be ready to find it.