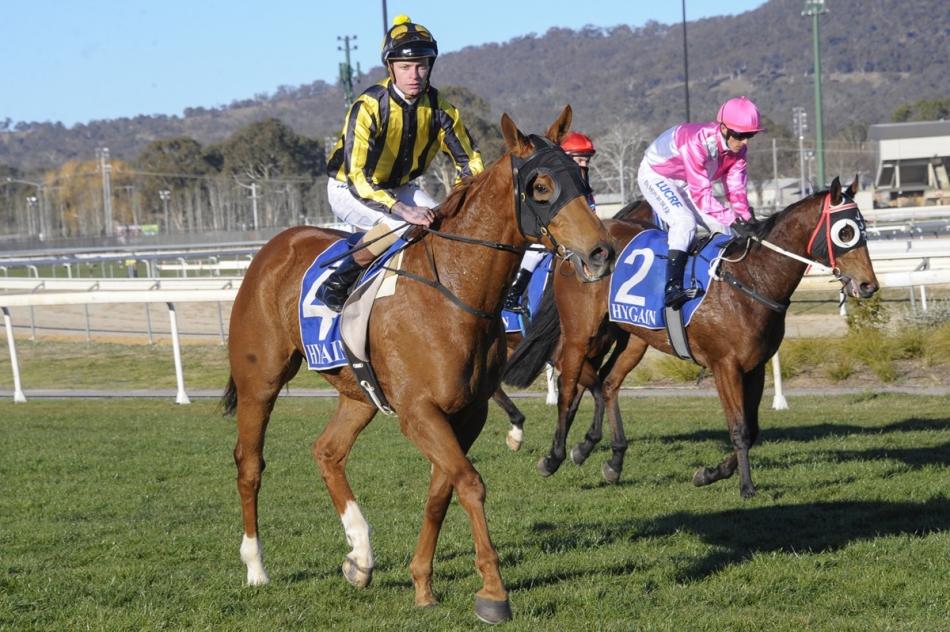 The Rail is back in the true position and the track should play well. It’s likely to present in the slow range with dry weather forecast. Most of the races present as decent betting affairs

Duke of Buckingham and Valiant Lad can run them along with a couple of other capable of sitting handy. A tricky race to start the day. VALIANT LAD (4) had trialled well and ran favourite on debut but was caught wide with no cover. In a leading city barn and is sure to have come on. Draws to ride the speed and is sure to be  hard to roll. WHATEVER IT TAKES (5) is a local on debut for the in-form Matt Dale yard and owns a Goulburn trial placing. Draws out but looks to have good ability and the betting will say if he's up to winning. DUKE OF BUCKINGHAM (2) is fast and found one too good first-up here two weeks ago when starting a well-supported favourite. He draws to box-seat and fitter gets the chance to go one better. NOBLE ALBERT (7) is one of 3 acceptors from the Matt Smith yard and go on the 1.5L defeat two-back at Hawkesbury on a dry track. Reaches peak fitness and he'll get a nice run from the low barrier. BLUE JAGER (8) is a stablemate on debut and McDougall's booking interests. Well-bred and has been trialled. The market will tell a lot with her. BET: Valiant Lad on what we've seen.

A number of on-pacers are engaged that are capable of pushing on to lead. SHENANDOAH (7) was quickly back to her best beaten 1.3L here behind Hezredhot. He looks in for a good campaign and fitter can take this out for a top local yard with McDougall sticking. ISLAND BAY BOY (8) is also third-up and missed a lip the latest at Goulburn and didn't have the best of it. That stacks right up and he should go close drawn for a soft run. HEZREDHOT (6) led and impressed winning the CL2 here on the wet track. He keeps improving and can deliver again without surprising. CAPRI LANE (4) switched to a leading national barn and was okay first up at Bathurst. He's won a Warwick Farm trial since and his best would be good enough. Just needs to find it. Keep very safe. BET: Going with Shenandoah in a good contest.

Sifu, Soldiers Desire and Splendiferous will all be prominent from the jump. WINNING BUSINESS (11) resumes and has switched to an up-and-coming Sydney barn. Her best figures win this and she brings a sharp Warwick Farm trial. Expect her to be ready to go and take beating. SPLENDIFEROUS (10) resumes for a leading Sydney yard and she won her latest Randwick trial by 3L. Was only beaten 2.3L first-up last campaign at Newcastle in a strong form Maiden. She should come back better and go close riding the speed from the low barrier. RUBAIYA (5) resumes for an in-form local yard and when last seen missed a nose heavily-bet in a CL1. She's trialled and needs to be kept very safe. SIFU (6) draws wide but was much better here behind Keith and is worth consideration with McDougall sticking. BET: With Winning Business of the money comes.

A good tempo with Calescent, Haralben and The Unknown Factor taking forward positions. CALESCENT (3) resumes for the Matt Dale yard and brings a decent level of form. Goes fresh and has won five times this trip. She will lead or box-seat from the low gate and the 3kg claim brings her right into it. THE UNKNOWN FACTOR (6) led and finished closer than expected resuming here in Open grade. He has more to give and has won second-up. Gets the handy 2kg claim and quick improvement is on the cards. PRAIRIE FIRE (1) just missed resuming in the Flat Knacker at Albury in Open grade. Has been tried twice at Group level and has plenty up the sleeve. Will be fitter but can he can lug the 67.5kgs is the query. HARALBEN (5) comes out of the same race and will push forward. Go on the 1.4L first-up defeat at Goulburn following a long break. McDougall is reunited and the gelding won't be far away. BET: Going with Calescent if the money comes.

Californian is likely to take up the running. CALIFORNIAN (9) was heavily-backed at her second start and proved too good at the mile for the Orange Maidens. He will likely control the race from the low gate and the well-bred filly will enjoy the lift to the middle distance and can win again. KNUCKLE WARRIER (7) raced handy and was beaten a half-length this distance at Albury. He's likely to run along again and can prove the danger reaching peak fitness. HIMIKO (10) will be better for the first-up run here at the mile and will enjoy a dryer track. He's up to this at best and can make quick improvement. Ditto OLMETO (8) who resumed at 1800m and needed it. He may need one more but is good enough. BET: Backing Californian.

General Dubai to go to the lead and set a genuine tempo. EMBELLER (6) just missed here second-up in stronger grade and has more up the sleeve. Gets McDougall first time and he would’ve had choices. Races handy and fitter the Sydney galloper will prove hard to beat. GENERAL DUBAI (2) resumes off a Randwick trial placing and has shown enough to suggest he can be very competitive. Has the speed to manage the sticky gate and the market will say if he's ready to go. MISS MAGNUM (8) peaks off the close-up effort at Gosford and draws to advantage. Keeps improving and is a player. ROCKETING TO WIN (4) will get a soft run from the low gate and has been flying for the new yard. He races well this track and consider with the weight relief. BET: Going with Embeller.

Fast tempo with Vivid Art kicking up from the inside gate and Cracking Mo pushing forward from a wide marble. REELCLASS (10) placed here heavily-bet before delivering the easy Maiden win at Goulburn. Might not have appreciated the wet track there after and has since won a Randwick trial. Draws to advantage and can bounce reaching peak fitness. VIVID ART (1) needed the run resuming in much stronger at Newcastle and three-back led and won a Ballarat Maiden by 3.3L. The mile suits now and the Sydney galloper can control the race from the paint. Expect sharp improvement. SISSECK (5) won the Maiden and then had no luck here on the wet after a slow start. The local has more to offer at the mile and can make the finish. CRACKING MO (8) didn't have the best of it in the same race unfancied but had missed a lip prior at Goulburn and go on that. He has the speed to manage the sticky gate and gets some gear tweaks. BET: Leaning to Reelclass.