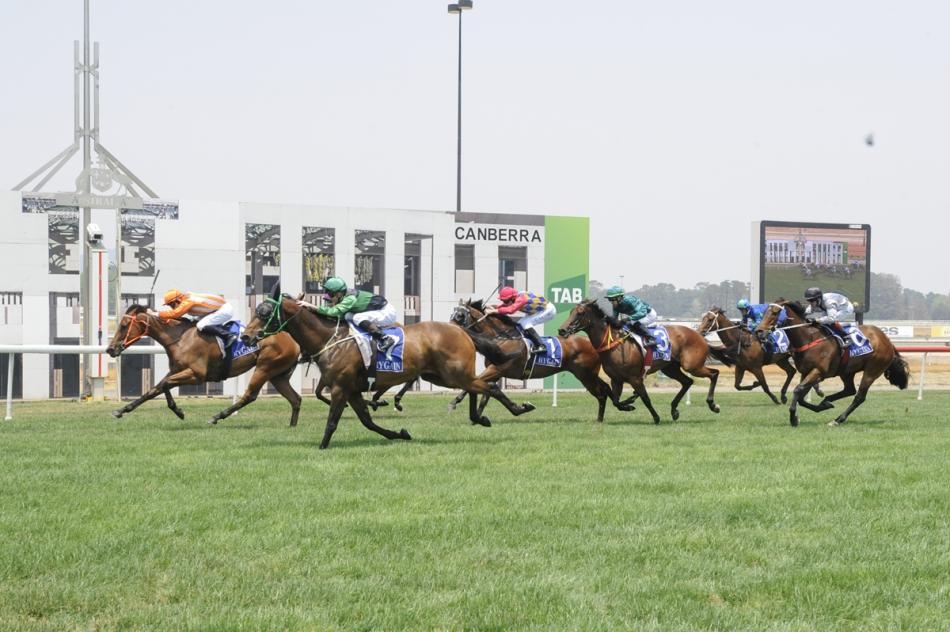 Canberra Racing Club offers up a nine-race program for its last meeting of 2021 which includes a 1400m TAB Federal and a strong 1000m Open Handicap.

The quaddie at Thoroughbred Park opens with the days’ feature event, the Benchmark 75 TAB Federal where Girls Are Ready looks hard to beat off a last start victory at the course and distance on November 26.

A 1000m Open Handicap follows where noted first up performer Mr Magical resumes off a breakout campaign earlier in the year which culminated with three straight wins on the South Coast through winter.

Wednesday’s meeting is the last to be held at Thoroughbred Park for 2021 with the first race of the day, a 1200m Benchmark 60 Handicap, scheduled for 1:46pm.

WINNING BUSINESS (5) is a very honest conveyance hitting the top five in eight of her past nine outings. Will be rock-hard fit for this and draws the rails for Loy. From an astute barn and looks the one they all have to run down. BLAZING BEAU (6) has placed two of three runs this time in including a second around this circuit. Rates among the leading chances. ROMEO VELLA (2) is racing in fine fashion with two wins and two seconds from his past five starts. Has winning claims again here on his home surface. EVANORA (3) resumes here and can run a race while fresh. SHIPWAY (8) has a handy record over this journey with two wins and five placings from 13 attempts. In the mix.

TIME FOR PEACE (2) has a solid record over this sprint journey with a win and four seconds from seven outings and will strip fitter third-up from the spell. Sure to be right there when the whips are cracking. PER IVY (4) was well in the market on debut at Wyong and duly saluted over this distance. Will have taken a bunch of confidence from that victory and no reason why she can't make it two from two. EXTRAVAGENT LAD (6) placed around this circuit last time out and will be nearing his peak now. Expected to be competitive. PRINCESS SPICE (5) has a win and a placing from three attempts at the trip and is one for the multiples. OUTTA REACH (1) is from a good barn and gets 2kg off with the claim. In the mix.

SPROUT WINGS (2) has been knocking on the door of late with two consecutive runner-up finishes and strikes a winnable affair here. Will be rock-hard fit for this and looks the one they all have to run down. WOULD BE KING (7) has finished second in two of three runs this time in including one around this track last time out. Has placed over this journey and looms as the main danger. STREET CRED (5) goes well over this track and trip with three wins and a second from eight outings. In the mix. CALL ME ARTIE (1) has placed two from four here on his home surface and can earn some minor money. SUBTLY SPRING (6) has won over this distance and can fill the frame.

A bit to learn here with a few facing the starter for the first time. BREAKAWAY WEEK (9) is one of those debutantes and showed enough in a recent trial to suggest she can play a role in this. Is trained on course and any moves in betting should be respected. NOVEMBER RHYTHM (2) is another on debut and has looked handy enough placing in two recent Hawkesbury trials. Gets the services of Penza in the irons and can feature first time at the races. YESTERDAY'S GONE (3) was a close-up second in her first race start and will take plenty of benefit from that race day experience. Looks a key player. ONE POSE (11) failed last time out but the two runs prior to start the career were full of merit. One of the main contenders. HOLLOW DOLLAR (6) strips fitter third-up from the spell and can earn a cheque.

KYALLA (9) improved last time out when third behind a pretty smart one at Hawkesbury. From a good yard and gets 1.5kg off with McLucas' claim. Doesn't face an overly strong contest here and looks very hard to toss. OAHU GAZE (2) is knocking on the door with three seconds from his past four outings. Has placed over this journey and looks set for another bold showing. The well-related THIRD EYE (12) resumes here but showed enough in her first preparation to warrant respect in this. In the mix. KHUMBU (5) is the most experienced galloper in the field and can earn a cheque. HUKA (17) wasn't disgraced on debut and is best of the rest.

GIRLS ARE READY (1) got the job done last time out and will take plenty of confidence from that victory. Taylor was in the irons for that last-start win and sticks. Is two from three over this track and trip and will be in it for a very long way. MAJOR TIME (2) loves racing here on his home circuit with two wins and nine placings from 16 starts. Strips fitter third-up from the spell and looks a genuine top-three contender. RAPIDITY (8) is a model of consistency hitting the top five in all 12 starts since joining the new stable. Has to be included. MEG (3) failed first-up but is worth another chance on the form she showed last campaign. HEZREDHOT (4) has two wins and two placings from seven runs here on his home surface and can earn some minor money.

MR MAGICAL (1) resumes here but closed off last campaign with three wins on the bounce before the spell. Has won three from five over this sprint trip and is sure to play a major role while fresh. COLONEL (5) has been thereabouts in recent efforts and will be at peak fitness now. Looks the main danger. THE UNKNOWN FACTOR (10) loves this course and distance with four wins and seven placings from just 14 outings and is a must for the exotics. PROUD MIA (2) mixes her form but can feature if she brings her best. CALESCENT (4) has won two from six here and gets 1.5kg weight relief. In the mix.

EASY ROSIE (8) is an honest commodity only missing a drum once in five starts, and that was a fourth. Placed at this track last time out and the step-up to 1300m looks ideal. Rates a leading hope. SPEEDZONE (1) resumes here but the form he showed when last in work was good enough to feature in this. Sure to make his presence felt. The consistent NEWTOWN BRAVEHEART (5) has only missed the top five once in nine starts and that was in a Highway. Has to be included. BUDDEROO BLITZ (4) has placed two from two at this track and can run a race while fresh. DIVINE FUTURE (7) has won over this journey and is drawn to get a soft run from gate two. In the mix.

BELLA VIOLET (5) is unlucky to have not saluted this time in with two close-up seconds to start the campaign. Her only win came over this mile journey and gets the benefit of the 1.5kg claim. Appears mighty hard to beat. KING OF SPADES (3) tried to lead all the way last time out but just got tired late. Drawn to get across easily for Penza from gate four and is sure to be in it for a long way. LOVIN' FEELIN' (11) shed the maiden tag last start and will take plenty of confidence from that victory. Can go on with the job now. Former Kiwi FLEETWOOD MACA (8) placed at Group 2 level across the ditch and will strip fitter second-up for the astute barn. Won’t know herself dropping back from Randwick Saturday level to a Set Weights Class 1. Has to be included. SUPER VIEW (4) has won here on his home track and is one for the exotics.

Racing returns to Thoroughbred Park in 2022 with an eight-race program on Friday, January 21. headlined by the TAB Federal Benchmark 75 Handicap over 1200m.