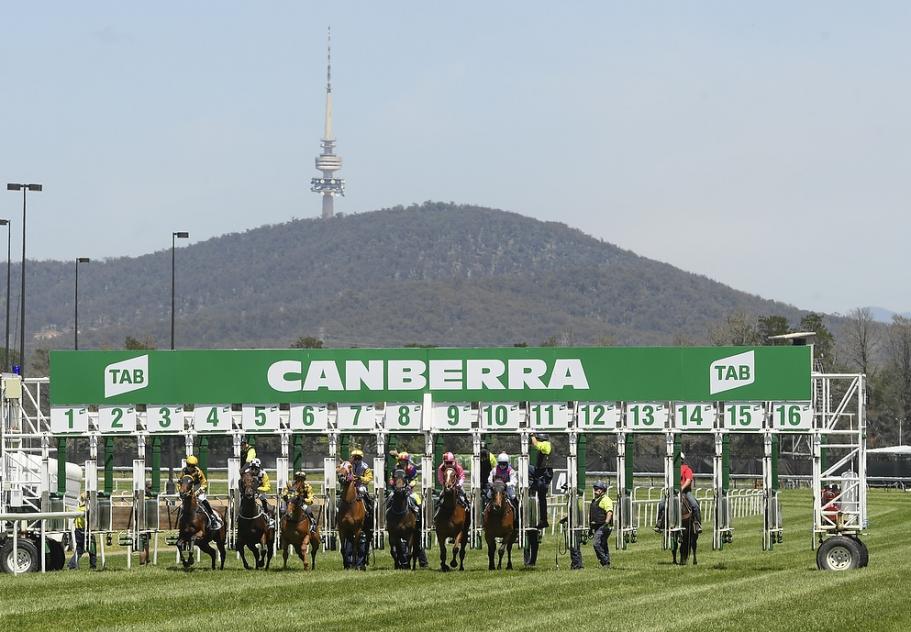 Fine weather and 24 degrees forecast for race day and the course proper will play in the good range. The rail is in the true position and the surface should be in top order after being well-rested. Several wide-open races and no surprise if the quadrella delivers a healthy dividend.

A small field but competitive.

FANTINI (3) just missed at Queanbeyan having his first run for Canberra trainer Todd Smart. Had no luck at all in that and it was a big effort. Is in well with Budler's claim and gets the nod.

WINDS OF WAR (1) has been racing in stronger provincial company and has placed 2/3 second-up. Just missed at his only run this track and Matt Cahill is a key jockey booking. A live hope.

WRITTEN STATEMENT (2) is fast and won the Maiden comfortably first-up for the new barn (Joe Cleary). Lightly raced and former Victorian Jack Martin is booked to ride. He won't have to improve much to be a player.

BLAZING BEAU (4) resumes with a 2kg claim off two city trials. The smokey.

LIGHTS ON THE HILL (1) will push forward and will likely control the race. Placed at Cootamundra at this distance and was even better at Moruya prior. Gets the blinkers first time and keeps Nick Heywood. Gets the nod.

STRATUM PRIDE (4) was well-supported at Queanbeyan the latest but was badly checked. First time at the mile but he's back in grade and represents the premier local barn. A player.

LOVIN' FEELIN' (8) is a Maiden running out of chances. Is Sydney-trained and is fourth-up off city and provincial Maidens and is back to the mile. Hasn't been having the best of it and finally gets a low gate. Matt Cahill's booking suggests they mean business.

HOKAHEY (7) is also close to peak and has been threatening. She has more up the sleeve and is also a hope.

BET: Leaning to Lights On The Hill.

GRAND LUSITANO (1) resumes and is sure to come back improved. Missed a lip here two back and will ride the speed from the low gate. The Luke Pepper-trained local rates to be winning if presented on-song.

EM CEE GEE (7) has had a few tries but was back to form just missing at Orange and didn't have the best of it. Presented off a Warwick Farm trial win. Will settle off them and hit the line.

MISS CAPELLA (5) comes out of the same race missing a nose on debut. Is sure to have come on but must manage an outside gate.

COOL ENCOUNTER (3) debuts for a sharp Sydney barn and has been well-trialled. Elevate if the big money comes.

MISS BARTY'S PARTY (3) missed a lip at Nowra and then went back and was plainer as favourite on a soft track. Gets back on the dry and can take this out racing fourth-up and drawn low with a handy 2kg claim.

SPIRIT OF ROMANCE (2) is lightly raced and needed the run resuming at Goulburn having switched to Nick Olive from a sharp Queensland barn. Gets the winkers first time and Damon Budler's handy claim. Won her only second-up run at the Sunshine Coast and quick improvement is anticipate.

Stablemate MISSILE MAGIC (4) missed a lip at Orange off an even better effort at Wagga. They stack right up but he's only had one placing in nine tries on dry surfaces - and it’s been a long time between drinks.

KNUCKLE WARRIOR (1) is in Canberra's stable and Matt Cahill's booking interests. Will race over further but he'll be fitter and could be the dark horse.

A plain contest and that opens the door for PORT DOUGLAS (5) who's been going better than most. He's fit and gets a low gate and the blinkers on again. In a sharp local barn and looks the one to beat on a 5-day return.

LARMOUR (6) is also in a leading local barn and resumed in good order at Orange. The mile suits and she should get a soft run from the rail. Three of his four wins have come this track and two at the trip.

MILAMOO (8) has placed at the mile and brought good form to the latest but found Open company too tough. Draws well with a small claim and can go much better.

BALONNE (3) doesn't win out of turn but was much better two-back at Moruya and the Keith Dryden-trained galloper can't be ruled out.

MOLLY NAILS (9) has placed both starts back in stronger city races. Was well-supported in the Listed Canberra Guineas at the back of the last preparation. Fitter and low in the weights and should be winning for a sharp local barn.

ISLAND BAY BOY (2) won a Federal at Queanbeyan and then was luckless in much stronger than this at Randwick. Gets in well with the 2kg claim and is also a live chance.

WASHINGTON TOWERS (1) led and was just pipped in Open grade at Queanbeyan. Has had one blip in a string of decent efforts and that was in town. He's a speedy galloper drawn to advantage and will take passing.

PROPOSE TO ME (3) resumed in town and finds easier. Has placed 2/2 second-up and is good enough to make the board.

Open on paper and tricky.

SHENANDOAH (2) resumes and is a leader and is right up to this. Is likely to come back further improved and has trialled well. Has the speed to manage the wide gate and Nick Heywood is a positive jockey booking. In a premier barn and appeals most.

CARTOGRAPHY (5) needed the run resuming in stronger grade. He runs along and Cahill is a key jockey booking. He'd be very competitive at best.

RHAPSODY IN BLUE (4) is a former Kiwi resuming for the local Luke Pepper barn. She's been racing at a good level and gets in well with the 2kg claim. Has a number of gear changes and has to be kept safe.

SASSYSAV (2) peaks off stronger provincial races. The Sydney-trained galloper draws for a soft run and the blinkers come off. Comes back 300m and this is winnable for her.

DOLPHINA (4) missed a nose at Wagga off the two wins and then found the extra 500m too tough after. Is back in grade and a bounce won't surprise.

ROOM NUMBER (5) came from the back winning comfortably over the mile at the Sapphire Coast. Placed over the middle distance three back and is in the mix.

CLEM FANDANGO (1) won at Orange and has been plain since in stronger than this. Comes out of the Dolphina race and will find the 2000m more suitable. Races well here.

A tricky form assignment to close the day's card.

EASIER (7) has switched to the Luke Pepper barn on a 293-day return. She's shown enough to say this is winnable and gets a dry surface to the first time. Cahill is a key booking, and she should get the run of the race.

PROPHET'S PRIDE (14) trialled well and just found one better on debut. It was a good effort and fitter she won't be far away with a good ride from the sticky gate.

HAYYU (8) will be close to peak fitness and was tracking well before failing the latest as favourite. Has an outside gate but can make the finish with average luck.

HARDERTHANTHEREST (13) is an improver in the premier barn. The 2kg claimer will run her along and she can get on the board.

BET: Easier if the market moves her way.