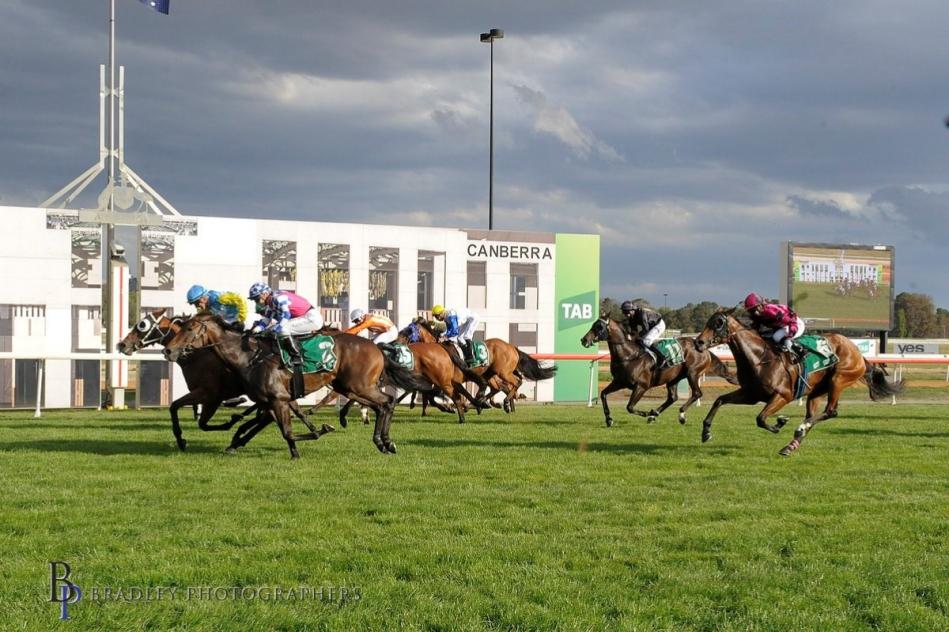 Good competitive opener with several chances. Local 6YO mare 8. KATHAIRE (Joseph Ible/Sam Clipperton) has mixed her form since a barnstorming Class 2 win at Wagga on Xmas eve. Didn't have the best of luck back in the field in two straight Federals here before strong late in similar company at Albury. hard fit for this trip, and draws to get the right trail.

MAIN DANGERS: Consistent 4YO Queanbeyan gelding 2. CONCRETE has just missed in his last couple, but looks even better placed here down in weight from the inside draw, with senior Sydney rider on. Canberra 5YO mare 3. POLYXENA is weighted to her best, and will need a share of luck from the widest gate. Hit the line hard in a BM 70 Federal here three runs back, and was even to the line last start in what was a handy mares form race at Canterbury. Under the odds! Include progressive Hawkesbury mare 6. ELENARA who upset a BM 66 field at Scone two back before working home from midfield in similar grade at Dubbo. Stable is under-rated.

Randwick 3YO gelding 4. SACRAMENTO (Gai Waterhouse & Adrian Bott/Adam Hyeronimus) careered away to win by more than six lengths first-up as a hot favourite at Queanbeyan in first run this side of the Victorian border. Was outclassed in Listed company in spring, but is breathing all over this next level from a soft draw carrying 1kg less.

MAIN DANGERS: Ultra consistent 4YO local gelding 1. DIP ME LID landed his maiden at the Sapphire Coast two runs back before sticking on well this trip and grade behind a very handy galloper. Rosehill 3YO gelding 5. SCICONIC is on the quick back-up rising in trip after a poor effort at Kembla on Tuesday. This looks a shade easier, and drawn the inside, but a big query in soft ground.

My Betting Attack: SACRAMENTO to WIN & QUINELLA 1 and 4

Tricky and competitive race, but two runners both third-up can fight this out. Home track 4YO mare 8. FUSCA (Joseph Ible/Hugh Bowman) will relish the step up to this distance after working home nicely in two runs back at deeper Federal level, and has shown a real liking for rain-affected ground.

MAIN DANGERS: Progressive 4YO Hawkesbury gelding 11. KARMAZONE looks well in the mix after hitting the line hard first-up at Goulburn in similar grade, and only previous start this track, charged over the top for an effortless Class 1 win last spring. Another popular local mare 9. MOOKAREENA was close-up in two Federals here before just missing same grade on the Kensington track. Up sharply in weight for a thinner battle, but form apprentice has been booked. Warwick Farm gelding 3. ELKANO didn't let down resuming in the heavy at home, and is some a query in the conditions up 5kg, but that was his first run since bolting in a Class 1 on this track more than a year ago.

Back to a wide maiden, with a few key first starters, and a stack of chances, but one debutant jumps out for me. Powerfully built 3YO gelding 3. BUDDEROO BLITZ (Mossman x Budderoo Miss by Forest Glow for Joseph Ible/Brodie Loy) was slow to begin, and over-raced for much of the way in a recent Wagga trial, but still rounded them up with ease, and one with plenty in reserve. Looks ready to roll for leading Canberra trainer/rider combination, and breeding suggests he'll get through soft ground.

MAIN DANGERS: Rival 3YO MARK'S KINGDOM (Animal Kingdom x Jessolaura by Lonhro) also debuts off a nice trial here for top stable, although drawn wide. Lightly raced 3YO local gelding 2. SCARLEO resumes without a public trial, but has enough ability fresh. Ran into a place late at only second start last spring behind Piping Roller who scored a dominant BM 64 win at Newcastle on Friday. Improving 4YO local gelding 1. ANTONIO has had two tidy runs back from a lengthy spell, but will need to get across early from a wide draw to be in the finish. Include local 3YO gelding 7. GAMBLER'S QUEST who resumes without an official trial, but draws well and was never far away in his first prep; while another 3YO on debut for the Matt Dale yard, 11. PROPOSE TO ME (Turffontein x Vows by Flying Spur) has trialled okay, but draws the extreme outside barrier.

High quality and exciting dash, but smart home track 4YO gelding 1. HANDLE THE TRUTH (Keith Dryden/Nash Rawiller) is a beauty first-up, and the one to beat from the draw. Had a terrific spring winning the Kosciuszko at Randwick before just edged out in the Goulburn Cup, and then beaten a touch over a length in the Listed Starlight. Six of his seven career wins from only 15 starts have come either first or second-up, and unbeaten in heavy ground, has earned the 61.5kg.

MAIN DANGERS: Progressive 4YO Hawkesbury gelding 3. RARE EPISODE rarely runs a bad one, and has been freshened since a narrow BM 78 win on the Kensington track, and close-up behind high class Pandemic on the Randwick course proper. Godolphin 4YO gelding 2. WAGNER has been freshened after three good efforts in Melbourne, the latest beaten only a length by in-form Blazejowski at Flemington. Looked sharp winning a recent trial on the synthetic, but wont want it any worse than Soft 6. Lightly raced Canberra 7YO gelding 4. STEPHAN has a tonne of ability, and resumes off a slick trial win in good time. Beat some high class sprinters winning two straight at Rosehill in spring, is good in wet ground, and top Sydney hoop reunites. Wide gate looks the only hurdle for one who likes to drift back. Lightly raced Gosford 7YO 9. CLEAR THE BEACH is a smart short-courser winning two straight in the country last spring before narrowly beaten twice in similar company as here on the Kensington track. Looks one of the best weighted runners all day dropping 7kg to 54kg limit after being beaten only half length by 4YO Randwick gelding 6. BLACK MAGNUM who came from midfield to win that race resuming before no match for leader Grey Worm in a strong BM 94 at Rosehill. Form tends to taper off into the prep, but still looks reasonably treated under 56kg for smart stable.

Very strong edition of a reliable black type form race that's effectively a set weight contest outside of the top-weight. Dropping 6.5kg to the 54kg limit and unbeaten second-up, lightly-raced 4YO Canberra mare 12. SAUSEDGE (Matthew Dale/Tommy Berry) can unleash her customary finish from well back off a good tempo. Did just that resuming in a BM 87 Federal when only missing by a head, and leading Sydney hoop hops aboard.

MAIN DANGERS: After a solid Victorian spring campaign, 6YO gelding 2. KEN'S DREAM switched to Rosehill for an even run in a high-ranking BM 100, and also bound to give a sight carrying 54.5kg. Big watch on talented 5YO Warwick Farm gelding 11. TRAVANCORE who resumed with a fair closing run in a strong BM 88 at Randwick when easy in betting, but always improves into second-up run. Draws to get a lovely trail, and handles wet tracks. Progressive 5YO Randwick gelding 6. CUBA is also well in on the limit weight after two fair runs back in BM 88 metro company, but looks under the odds in this field; while another one from the Farm, consistent 4YO 14. DIO D'ORO is handily placed dropping 4.5kg to the limit, and scored a dominant heavy track win at Canterbury three runs back.

Feature race of the day for the 2YO's, and keen at the value on emerging Randwick colt 3. BARBARIC (Peter & Paul Snowden/Kerrin McEvoy) who resumed for only his second start for a dominant off-speed win on the Kensington track, and this looks an ideal second-up progression down 1kg for top juvenile stable. Bred to handle soft ground by prolific I Am Invincible out of multiple Group-winning mare Mimi Lebrock.

MAIN DANGERS: Plenty of them. Super smart Warwick Farm filly 13. CELLSABEEL is the big X factor, although battling to beat the clock and stewards for a start with well-publicised hoof problems. Announced her ability with a slashing heavy track win at Rosehill before pulling up lame after dropping out in the Silver Slipper. Rosehill colt 1. RETURN WITH HONOUR was a debut winner on Boxing Day at Randwick for leading 2YO stable before struggling in the heavy, but rebounded with a nice effort in the Group 3 Canonbury. Won a recent trial, but must be query in soft conditions; while 2. BARTLEY is clear best of the rest!

My Betting Attack: BARBARIC to Win

My Betting Attack: BARBARIC & SEE YOU SOON Both to Win

Competitive sprint to finish. Progressive 3YO home track filly 8. EXOTIC DEEL (Nick Olive/Richard Bensley) is the one with real scope after storming home for a dominant maiden win at Albury. Down 2.5kg for this, bred to handle the ground, and even better suited on the bigger track.

MAIN DANGERS: Rival local filly 4. ELTHAM PALACE has proved costly for punters since winning her maiden in the heavy at Nowra eight weeks back. Has sat on the speed in her last three over this distance, but struggled to run through the line. That said, back to soft going from a good draw, with leading Sydney jockey aboard, she won't get it any better. Warwick Farm filly 2. FOR LOVE comes back from two fair runs in middle benchmark company; while watch the betting on Warwick Farm filly 7. ALWAYS ROSES who cruised home to win her maiden first-up at Orange, and while this is much tougher, she draws a soft gate and drops 2.5kg to the limit weight.