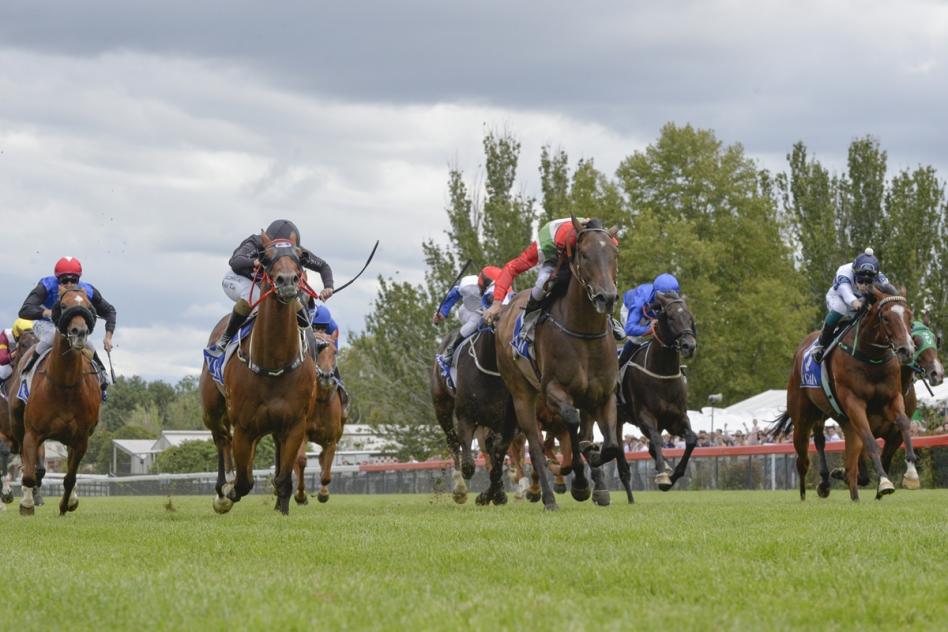 Lightly raced six-year-old local mare 3. FANTINI (Todd Smart/Damon Budler a1.5kg; 55kg) only has to jump fairly here to finish over them. Has been her own worst enemy at the barrier release in the last couple, but still hit the line to finish only a length from Exaggerate at Queanbeyan 12 days ago, and back at home on the bigger track is ideal. Preferred in this to a BM 60 later on the card.

Good race. Home track three-year-old filly 6. DERANGED (Nick Olive/Michael Travers; 55kg) is the one to beat here fifth-up in her first prep, and out to the mile for the first time. Charged home late in a handy maiden at Albury before no match for a smart winner there who then should have won again at Hawkesbury. Much more effective when ridden quieter, and beautifully treated here under the set weight scale.

*MAIN DANGERS: Emerging four-year-old mare 7. Hokahey hasn't missed a place in three runs this prep, and was strong through the line at Cootamundra 11 days back despite doing plenty of work from the gate. It was painful watching three-year-old filly 4. Stratum Pride last time out in a CL2. Blew the start, then refused to settle before finding all sorts of trouble, yet still made up late ground and wasn't that far from the winner. No surprise a jockey change has been made, and drawn further out back a little in class are key plusses. South Coast four-year-old 1. Lights On The Hill stuck on only fairly in that same race at Cootamundra, but is hard fit and blinkers have been added; while five-year-old mare and first-up country winner 2. Elegant Carriage is on the next line.

My Betting Attack: DERANGED to WIN and Box Exacta: 4,6,7

Back to a very thin sprint on a firm surface stacks up well for consistent local four-year old 1. GRAND LUSITANO (Luke Pepper/Ms Kayla Nisbet; 60kg) who resumes from a good draw off a lengthy break, despite not publicly trialling. Wasn't far away in a stronger sprint first-up last time, and draws to get a sound trail.

*MAIN DANGERS: Metropolitan three-year-old filly 5. Miss Capella has drawn wide, but went close on debut in a country maiden for fillies and mares.

Speed should be okay in what is a moderate race depth-wise. Progressive four-year-old metro mare 4. MISS BARTY'S PARTY (Jarrod Austin/Ms Julia Presits a2kg; 55kg) is the best weighted runner in the race after the claim, dropping 3kg from an average effort in a similar affair at Nowra. Was far more effective getting home the previous start when ridden quieter, and from this draw can settle back with cover and pounce late.

Small but tactically competitive field over the mile here. Getting back out to her pet trip, home track seven-year-old mare 8. MILAMOO (Mick Miladinovic/Ms Amy McLucas a1.5kg; 55kg) can make it two wins from her last three after being run off her feet out the back over 1200m on that totally unsuitable downhill track at Queanbeyan. Less depth here, and can be tucked away with cover back in the field before producing a dominant final 500m.

*MAIN DANGERS: Local five-year-old 5. Port Douglas has been very disappointing so far this prep, but blinkers have been reapplied, and he finally returns home from a nice trailing draw. Perennial back-marker, eight-year-old 3. Balonne is capable of rattling off a winning final 400m even under big weights, although debatable whether he'll get enough speed up front to be a factor late.

My Betting Attack: MILAMOO to WIN & Quinella: 5 and 8

Good class feature sprint headed by promising home track four-year-old mare 9. MOLLY NAILS (Matthew Dale/Kayla Nisbet; 55kg) who looks primed to strike third-up. Has been good through the line in two deeper metro races so far, and is supremely placed on the limit weight. The one to beat!

*MAIN DANGERS: Liked how lightly raced five-year-old 6. Hezredhot dug in late to land that BM 72 at Queanbeyan 12 days back, and drew to find a similar spot in transit. Expecting four-year-old 2. Island Bay Boy to bounce back after being beaten out of sight in the much stronger Kosciuszko at Randwick. Will carry only 2.5kg more after the claim. Local five-year-old 1. Washington Towers is screaming to win one after four runs back. Dropped out after leading in a metro BM 72 before being edged out in that tight finish at Queanbeyan. Draws well with a claim, but a query on whether he can do it at both ends over the distance. Included in exotics, tough seven-year-old 7. Mr Kylin down in weight from the inside draw.

Honest seven-year-old local mare 8. SLY SONG (Nick Olive/TBA) couldn't be fitter, and can go back to back fifth-up. Finished best to claim a handy CL2 at Queanbeyan, and won her only previous start here at home.

*MAIN DANGERS: Big market watch on ex-Kiwi mare 4. Rhapsody In Blue having her first start since mid June for the new local stable. Local five-year-old 2. Shenandoah draws off the track, but normally comes to hand quickly, and the recent trial was strong. Local mare 3. More Shots has been freshened up since given no hope in transit resuming in a BM 60; while 7. Honeysuckle Choice is advantaged over a further 200m, with a stronger rider aboard.

Tricky test over the longer journey. Back on a firmer track and dropping 500m in distance are two giant factors that can enable lightly raced Wagga mare 4. DOLPHINA (Tim Donnelly/Jordan Mallyon; 57kg) to make it three wins from her last five. Had been attacking the line from well off the speed all prep until failing to run out a BM 66 over 2500m. Draws to get the right trail.

*MAIN DANGERS: South Coast mare 5. Room Number finally regained his form of those early years sweeping home to claim a CL2 well into the current prep, and backing up quickly. Up 2kg in weight but will run this right out. Capable mare 6. Pahruli charged home to beat Room Number three weeks back, and she has a solid record this trip and track. Home track five-year-old 1. Clem Fandango can pick and choose when to fire, but he'll find this a bit easier than that same 2500m trip at Wagga when failing to run on. Draws inside, with a more senior and superior rider aboard. Included in exotics, four-year-old mare 2. Sassysav with blinkers off.

Big field of maidens to round out the meeting. Promising three-year-old Queanbeyan filly 14. PROPHET'S PRIDE (Paul Facoory/Shaun Guymer; 55.5kg) was terrific on debut at home taking a stack of late ground off the heavily backed winner, despite missing the jump. More depth here and drawn wider, but if she can find cover back in the field will lap up the extra trip and long run home.

*MAIN DANGERS: Big watch on home track mare 7. Easier returning for her first run in nearly 10 months, with no official trials. Improving local four-year-old 2. Gambacorta will relish getting back on dry ground, but still needs to find a length or two over this distance. Keep safe home track mare 10. Pandering who drew the outside barrier, but chased from a long way out fourth-up, and much better suited on the bigger track.