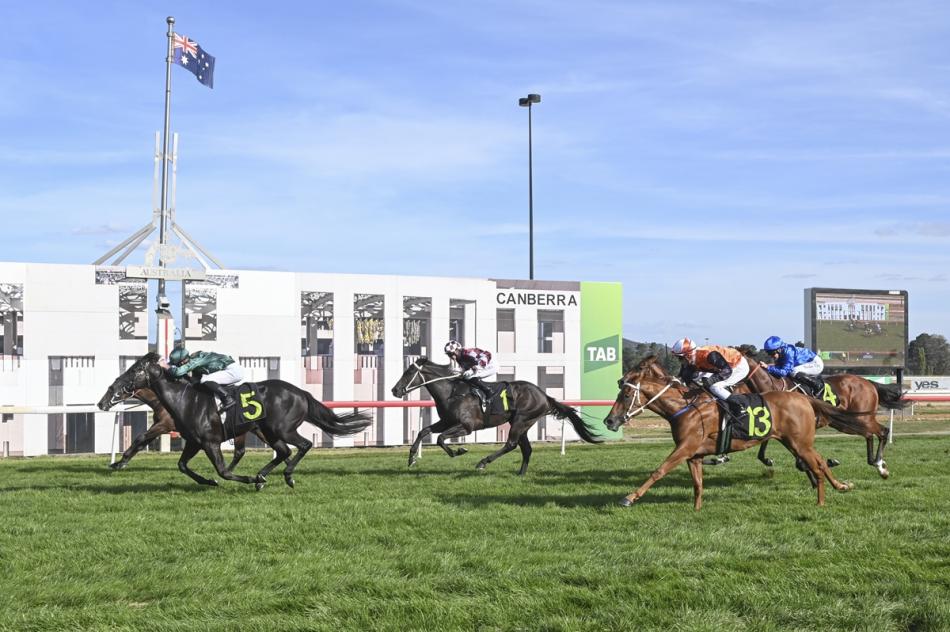 Progressive Randwick filly 5. GIN MARTINI (John Sargent/Jeff Penza; 55kg) rates a good thing in this second-up off a five week break dropping back a long way in grade from the Group 3 Belle Of The Turf at Gosford where she failed to run on, and importantly back on firmer ground.

*MAIN DANGERS: Metro mare 2. Sprout Wings loomed to win from the trail last start but just couldn't overhaul the winner, and this is weaker. Big gap to the rest headed by 7. Miss Horsbro who is at peak fitness.

Keen on Albury four-year-old 2. BALEDON (Ron Stubbs/Matthew Cahill; 60.5kg) who will relish getting back out to the mile on a bigger track where he can settle off them and finish over the top.

*MAIN DANGERS: Riverina five-year-old 4. Decker will find this easier than metro BM 64 grade in Victoria where he punctured badly after being ridden in front. Better when ridden with a sit, and gets nice cover in this. Keep safe local four-year-old 1. Call Me Artie who is better placed back to the mile, although  not well treated at the weights.

My Betting Attack: BALEDON to WIN

Small field in the feature sprint augurs well for smart four-year-old 3. MR MOPPETT (Phil Sweeney/Damon Budler a1.5kg; 59kg) who can settle just off what still should be a solid speed, and finish over them third-up. Comes off a smart BM 66 win at Corowa, and given four weeks between runs.

*MAIN DANGERS: Must include six-year-old 1. The Unknown Factor who powered home third-up for a dominant BM 83 win here a fortnight back, but the handicapper hasn't missed him up a hefty 6.5kg to 61.5kg. Keeping safe home track four-year-old 5. Smuggler's Bay who landed a country CL3 two runs back before getting home late in tough Highway grade, and winkers go on.

Tricky maiden with a few chances. Like five-year-old metro mare 3. EL NIDO (Ciaron Maher & David Esutace/Ms Louise Day; 57kg) third-up with blinkers applied. Has worked home well in consecutive deeper provincial races when both times hard in the market, and draws to get an ideal trail around midfield.

*MAIN DANGERS: Big watch on improving metro three-year-old 4. Costly who dropped out as a heavily backed favorite first-up at the provincials on Boxing Day; while both improving home track three-year-old 2. Manderboss and local mare 5. Third Eye can fight out the minor end of the prize.

Competitive enough race for this grade, but all aboard provincial mare 6. ZANSHIN (Colin Besters/Jeff Penza; 57kg) who can make it two straight coming off a tidy country BM 58 win. Draws to find a lovely trailing position just off the speed over her pet trip.

*MAIN DANGERS: Metro four-year-old 2. Shadow Chaser draws inside, and finds a thinner race deep into the prep; while local mare 4. In De Sun Iwilcome resumes, and did win first-up last time at the provincials; and Albury four-year-old 3. Tap 'N' Run also returns without publicly trialling but that's typical of the stable approach.

Like progressive Randwick mare 2. KYALLA (John Thompson/Blake Sprigss; 58kg) fourth-up. Sailed home for a dominant maiden win here two weeks back, and this looks a lovely follow-up race from an ideal trailing draw, with a stronger rider going on.

*MAIN DANGERS: Drawn right alongside, consistent filly 4. Easy Rosie is the immediate threat. Has only missed a place once this prep, and will roll forward to find a nice on-speed position. Watch the betting on South Coast filly 6. Brave Maso who was just that when scoring a fighting maiden win from off the speed at third start after covering plenty of ground; while local four-year-old 1. Dubai Centre can improve third-up at big odds.

Moderate tactical battle here stacks up well for Warwick Farm three-year-old 3. PEREGRINATION (Richard Litt/Brendan Ward; 61kg) who gets an overdue and significant drop in grade well into his prep. Closed off okay in consecutive metro runs on heavy ground before outclassed at huge odds in the Listed Gosford Guineas, and right back in his comfort zone here from a good trailing draw.

*MAIN DANGERS: Provincial mare 11. Divine Future is a clear threat behind a smart CL1 win here two weeks back, and remains at 56kg; while country mare 6. Speed Camera is over the odds third-up.

My Betting Attack: PEREGRINATION to WIN & Quinella: 3 and 11

The maidens wrap it up, and very keen on home track three-year-old filly 14. LA MIA VIA (Keith Dryden/Jeff Penza; 55.5kg) who can bounce back second-up at her fourth start. Nothing went to plan a fortnight ago at the Sapphire Coast where she got a mile out of her ground on a very shifty track & didn't finish off. Jockey change too is huge.

My Betting Attack: LA MIA VIA to WIN