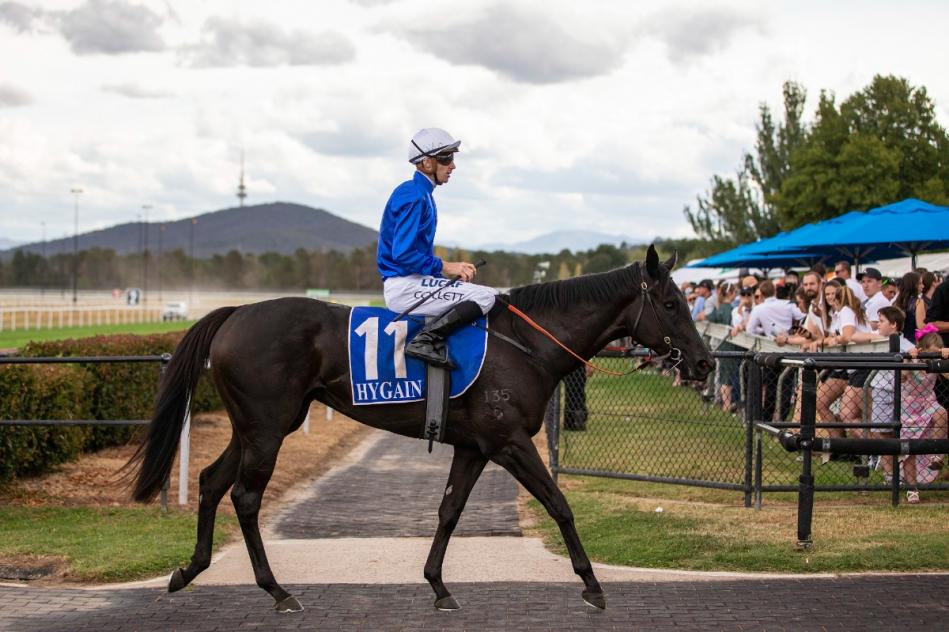 Good competitive Maiden to open the meeting. Randwick 3YO gelding 2. THE FIRST RING (Gai Waterhouse & Adrian Bott/Ms Winona Costin; 57.5kg) was over-run on debut in the heavy at Kembla, but much better placed over a little further and back on firm footing. By a dual Group 1 UK winner, and can control this from the draw.

MAIN DANGERS: Local 3YO gelding 1. Scarleo has found the line well in his last two, and should be in the finish fourth-up. Look for sharp improvement from 3YO Godolphin filly 6. Delicately at third start on better ground after finishing well back in a strong Kembla maiden, and the second horse then won at Newcastle on Thursday; while home track 5YO gelding 4. Attuned loves to roll forward, and hasn't been far off them all prep. Blinkers come off, but still faces a task to see out a strong seven furlongs.

Tempo: Moderate
My Betting Attack: THE FIRST RING to WIN & Quinella: 1 and 2

Tough race where early tactics will be crucial. Banking on resuming Warwick Farm 3YO 2. CHATEAUX PARK (Jason Coyle/Brodie Loy; 58.5kg) taking the next step returning off two solid trials as a gelding. Found the line okay in two runs last spring at Kembla, and while bred to get over further, will love the long run home here fresh.

MAIN DANGERS: Well-bred 3YO Randwick gelding 8. Standfortheanthem from the Waterhouse-Bott camp resumes off a smart trial with blinkers going on. Was narrowly beaten as a hot favourite on debut at Goulburn last winter, but been given plenty of time, and only needs even luck from a wide gate to be in the finish. Randwick 3YO gelding 7. Rocketing To Win from the leading Snowden yard has taken a while to hit his straps, but was close-up in a handy maiden at Muswellbrook last start, and draws to get a nice trail just off the speed. Stablemate 3YO colt 3. Deauville has been ridden back and from the front in two runs to start his career, but struggled to find the line both times, although this is a drop in class, and also draws to get an economical run. Improving local 4YO gelding 1. Farage has finished hard in two runs back on the South Coast, and should relish the extra trip back on home track. Will have little choice but to go right back from the widest barrier so will need plenty of speed on up front.

There'll be no loafing in this, and again early positions will be vital. Smart 3YO Randwick filly 3. PENANG (Peter & Paul Snowden/Nick Heywood; 60kg) didn't make the immediate step up to BM 64 level after a dominant front-running Maiden win at Newcastle running good time. Draws to take advantage of her natural speed, and far less depth here.

MAIN DANGERS: Goulburn 5YO gelding 7. Rozburg was heavily backed first-up in a CL2 at Gundagai, but didn't fire on the tighter track. Better suited here ridden quieter from a wide draw with blinkers going on. Hard to place talented 3YO local filly 8. Tejori resuming off a long break for the Nick Olive stable. Destroyed a good maiden field here on debut nearly a year ago before immediately tackling metro opposition. Draws off the track, but is a natural runner so watch the market closely. Moruya 4YO gelding 4. Legislation produced his best run in a while charging home late fourth-up behind a good quality Canberra sprinter. Both 3YO Hawkesbury filly 10. Tadema, and 4YO South Coast gelding 9. Thorn Brook, who won their maidens two runs back, can be included in wider exotics.

One of the toughest and most open battles on the card. Progressive 3YO Godolphin gelding 1. CAMP RIFLE (James Cummings/Koby Jennings; 62kg) is ready to win, despite being lumped with a huge weight, after four improving runs back and blinkers going on. Just missed in a strong CL2 at Kembla after trailing the speed, and even better placed back on top of the ground.

MAIN DANGERS: Warwick Farm 4YO gelding 7. Tresse D'or ran on okay resuming in a stronger BM 70 at Wyong, and the second horse has since won at Canterbury. Regular rider gets back on. Home track 5YO mare 4. Sweet Knuckle resumes without an official trial and prefers it longer, but capable of producing fresh. Before being spelled, finished well to claim the Bateman's Bay Cup, then outclassed in a BM 70 Federal. Local 4YO gelding 8. Moss the Boss didn't do much resuming at Gundagai, but always improves into second-up run and better off back on the bigger track; while another one trained on the track, 5YO gelding 2. Waiheke also resumes without a public trial, and at his best over more ground, but fresh record is sound enough.

Plenty of chances again. Capable 3YO filly 3. ROCKAROSA (Keith Dryden/Blaike MacDougall; 61.5kg) can strike fourth-up, and first run for new Canberra stable, despite coming back sharply in trip, rising in weight and drawn off the track. Finished on well late in two stronger BM 70 metro races before flat to the line up to the mile at Wyong. Much better off ridden quieter over a sprint trip.

MAIN DANGERS: Progressive 3YO Warwick Farm filly 9. Kimmylee resumes off two solid trials, and will try to repeat the dose from November when she swept home to win here on debut. Randwick 3YO filly 10. Candy Bar will likely go forward and be in this for a long way dropping in weight. Was overhauled by a real good one last start at Scone, and previous form was sound enough. Warwick Farm 5YO gelding 1. Moralist has mixed his form over four short-course runs this prep, and while he has the ability from a good draw, looks weighted out of it with 62kg. Godolphin 4YO gelding 4. Shaibanat has more to offer than his modest record suggests. Did little resuming in a CL1 at Kembla, but only career win so far came second-up in a good maiden at Wyong last spring. Watch the betting on resuming 5YO local mare 7. Successful Day who draws off the track but only win so far came fresh.

Feature race of the day, and typically its another deep and open sprint. Smart 5YO Goulburn gelding 6. SAFE LANDING (Kurt Goldman/Nick Heywood; 61kg) looks hards to beat third-up, and drawn to get plenty of cover just off the speed. Held ground okay at second run back in a CL2 at Muswellbrook, and the winner then won a Highway at Randwick next start.

MAIN DANGERS: Liked the way local 5YO mare 10. I Am Kalani finished hard third-up at Wagga, and she's banging on the door back at home, despite sharp jump in weight. Local 6YO mare 3. Ballista resumes with a smart fresh record. Continued his ultra consistent form from spring, just missing first-up in the heavy at Nowra before motoring home to win the BM 82 Scamper at Wagga on Australia Day. Weighted to his best in this company, but just needs to find some cover from a tricky draw to power into the finish. Home track 5YO mare 4. heaven On Earth is also capable second-up over this trip after a fair return in a strong BM 87 at Moruya. Upset a good BM 70 field at canterbury last spring. Another Goulburn visitor, 5YO gelding 7. Gundy did his best work late resuming in a BM 64 at Gosford, and two of his three career wins have come second-up. Watch the market on local 4YO mare and former Tasmanian 9. Divi who punctured badly after settling on speed in a BM 83 at wagga, with trainer adding front pads.

Tricky finish over the longer journey. Godolphin 6YO imported gelding 4. WREN'S DAY (James Cummins/Koby Jennings) can break the "Down Under" drought second-up, with winkers going on. Has been freshened up with a quiet trial after closing off okay as an easing favourite at Gosford, and draws to park in a stalking role off the speed.

MAIN DANGERS: Warwick Farm 3YO gelding 8. Sirmaze is hard to price coming back from an early autumn campaign in much tougher Group company, but looks well weighted in this grade. Warwick Farm 3YO gelding 5. Lord Tropicana finally broke through for a deserved maiden win over further at Newcastle, and has been freshened for the drop back in trip. Only needs to get in from a wide draw to be in the finish. Expect a much-improved run from Randwick 3YO 4. Echo Lad also back to a more suitable trip after dropping out badly at Newcastle last start.