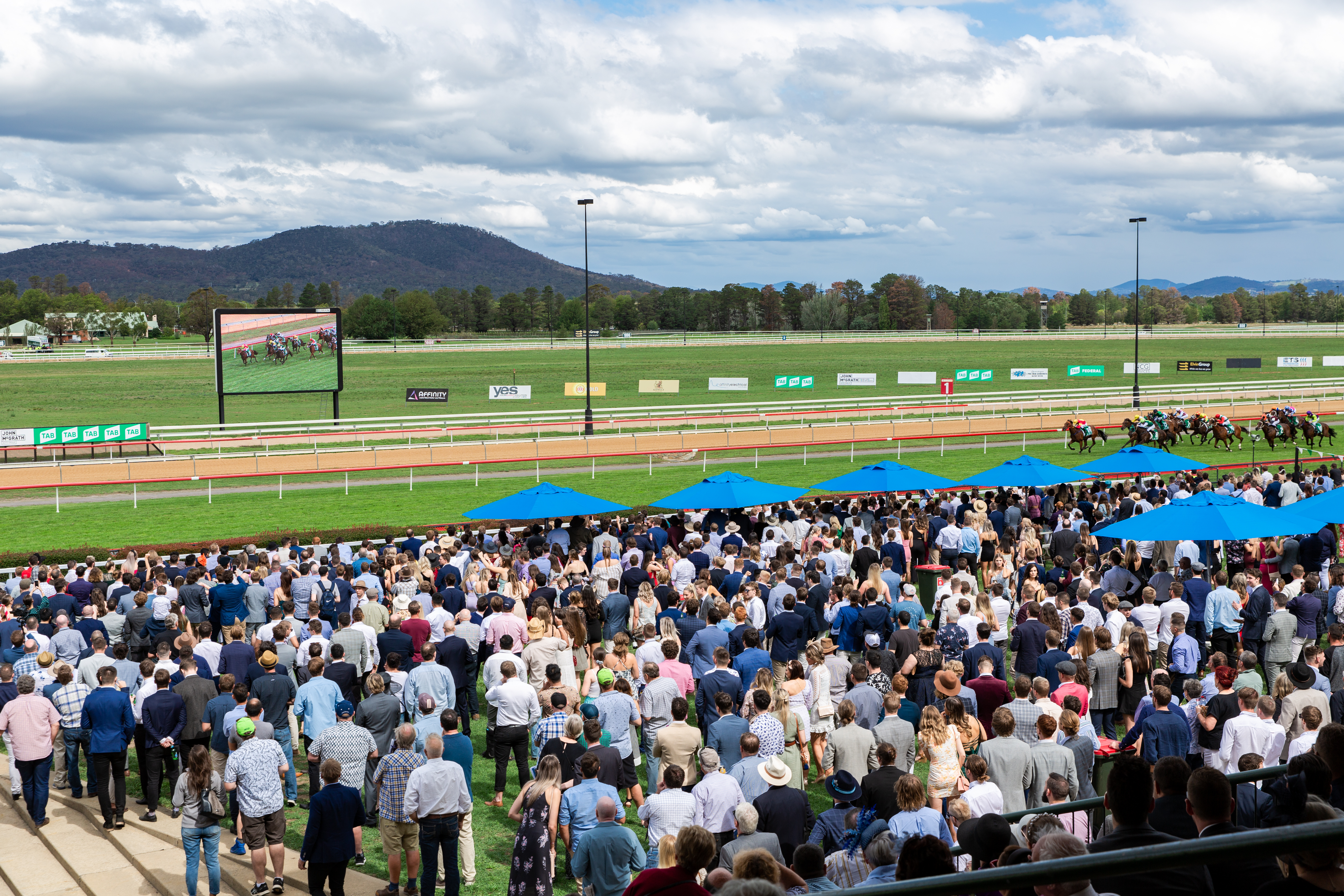 Improving Wyong 7YO gelding 3. MY EMPIRE (Brendan Ward; 59kg) from the Allan Denham stable missed by a whisker getting home third-up at Queanbeyan. No stronger here, and draws to get a soft run on the fence around midfield.

MAIN DANGERS: Expect sharp improvement from Waterhouse-Bott 4YO 2. Gaelic who was flat first-up in a stronger race at Newcastle, but did pull up with problems. Local 5YO 8. Mohahna didn't fire a shot here last start, and stretches out to the mile in what looks modest company. Include Nowra 4YO 1. Alqaab in exotics who was plain in that same race as the top selection, but previous form was sound enough to be in the finish; while 4YO mare 4. Dance Too Hard won her maiden convincingly here second-up.

My Betting Attack: MY EMPIRE to Win

Deeper battle here, and promising home track 4YO mare 4. TEMOIN CHAUD (Blaike McDougall; 58.5kg) from the Nick Olive yard should take care of these second-up well back in grade. Had little luck first up from the tricky gate in a CL3 Highway at Randwick, and steamed home to win second-up in only previous prep.

*MAIN DANGERS: Local 6YO 1. Eaglehawk has boxed on to go down narrowly in his last two, and draws to get a soft run behind the speed; while 6YO 5. Trapper Tom finished over the top of Eaglehawk last start in that BM 58 at Queanbeyan, but meets him worse at the weights here.

My Betting Attack: TEMOIN CHAUD to Win & Quinella: 1 and 4

Out in distance we go, and despite a 3kg weight rise, 5YO gelding 3. HAVADUEL (Blaike McDougall; 61kg) from the Joe Cleary stable at Moruya can make it three straight. Ploughed through the heavy to win two back before came from well off the speed for an impressive BM 66 win in record time again on home track, and looks even better suited here on the bigger circuit.

*MAIN DANGERS: Kembla 5YO 4. Power Lift is ready for this longer journey after working home okay in a BM 64, and only just missed in his previous run when caught in the last few hops. Queanbeyan 6YO 6. Hilltop Hood has had little or no luck this prep, and was strong late in that race behind the top selection. Will again settle back from the wide draw, but watch for him late with a 2kg claim. Include tough Warwick Farm 9YO 1. He's A Given who got home late in a strong provincial BM 64 third-up, and will appreciate the longer trip; while South Coast 6YO 5. Garros can mix his form but did win a BM 70 here two runs back, although peak runs are generally on rain-affected ground.

Back to the short course for the maidens, and it's a tricky affair, with a few debutants on show and 11 & 14 the likely leaders. Local 4YO gelding 1. UNDERTHESPOTLIGHT (Patrick Scorse; 59kg) from the Todd Smart stable was good first-up at Albury behind a smart sprinter when covering ground, and draws to get a lovely trail in behind back on his home track.

*MAIN DANGERS: Big market watch on Randwick-based Nicconi 3YO and first starter 6. Aerobatic Warrior, who is fit enough having won two of his three lead-up trials and was pushed right out in the latest. Locally-trained 3YO 8. Grand Lusitano debuts from a wide draw, but ran good time bolting in a recent trial at Goulburn. Include improving Warwick Farm mare 9. Indignant who hit the line late in heavy ground here second-up; while another debutant 12. Premosphere, by the former Group 1 winner Exosphere, did it easy winning a 1200m trial from in front at Warwick Farm, but is drawn wide.

My Betting Attack: UNDERTHESPOTLIGHT to Win

Very keen here on improving Warwick Farm 4YO 1. MACCOMO (Blaike McDougall; 59kg) trained by Joe Pride second-up on the bigger track. Should have won fresh at Wyong when afforded little luck when it counted, and the longer trip here in his favour.

Dangers: Goulburn 3YO 13. Taylor Be Swift was good from the back on debut in heavy going at Wagga, and well treated on the weight scale being only one of two fillies in the race. Home track mare 6. In My Wallet finished hard in a handy maiden resuming at Albury, and will relish returning to the bigger track over more ground; while another local 5YO 2. Promesa can improve back on firmer footing.

My Betting Attack: MACCOMO to Win

Really competitive sprint here, with good pressure on up front. Talented Goulburn 5YO gelding 6. VERDI (Ms Winona Costin; 58kg) from the Kurt Goldman yard hasn't raced for nearly 11 months, but has had two strong trials, draws to sit right behind the speed, and loves it dry.

*MAIN DANGERS: Progressive Moruya 5YO 3. Akeed was solid first-up off a long break in a good CL3 at home, and draws to get a charmed run on the speed. Canberra 6YO 5. Romeo Vella got home late in that same CL3 at Moruya; while 5YO mare 7. Loose Wire is best of the rest.

My Betting Attack: VERDI to Win & QUINELLA: 3 and 6

Feature and wide open race of the day, with a stack of hopes. Like the value about progressive 5YO Canberra gelding 10. ROYAL MONARCH (Michael Heagney; 57.5kg) from the John Rolfe yard who hasn't missed a place in her last five, including two wins. Swept home under 60kg to win a weaker race at Gundagai, and while this is tougher, draws to get a lovely trail just off the speed.

*MAIN DANGERS: Smart 4YO 8. Clearly Regal resumed off a long break with a terrific closing effort in a CL3 Highway at Randwick over the same trip. Fitter now, back in grade, and is an immediate threat. Hard to place capable 4YO 3. Battleground who is fresh and having his first run as a gelding for Matt Dale after switching from the Snowden yard. Hasn't publicly trialled, but generally comes to hand quickly, and returns with key gear changes. Tough Queanbeyan 5YO  5. Concrete was strong through the line in the Federal here a fortnight ago. Consistent local mare 11. Onthetake let down with a withering late burst to win that last Federal, and again will be tucked away back in the field and saved for one last surge. Another mare trained on the track 7. Ons Vier also hit the late in that race, although has a tricky draw; while 6YO Braidwood mare 6. Elegant Ellen will use her tactical speed from the inside, and comes off an all-the-way win in a CL3 at Moruya; and consistent 7YO 13. Our Finvarra is capable of finishing over the top off a strong tempo.

We close a strong meeting with the restricted sprinters. Randwick 4YO gelding 2. WINNING BROTHERS (Blaike McDougall; 61.5kg) from the Peter Robl yard did it tough first-up in a much stronger race at Wyong, and dropped out. Can hit back hard here from a better draw, with blinkers added.