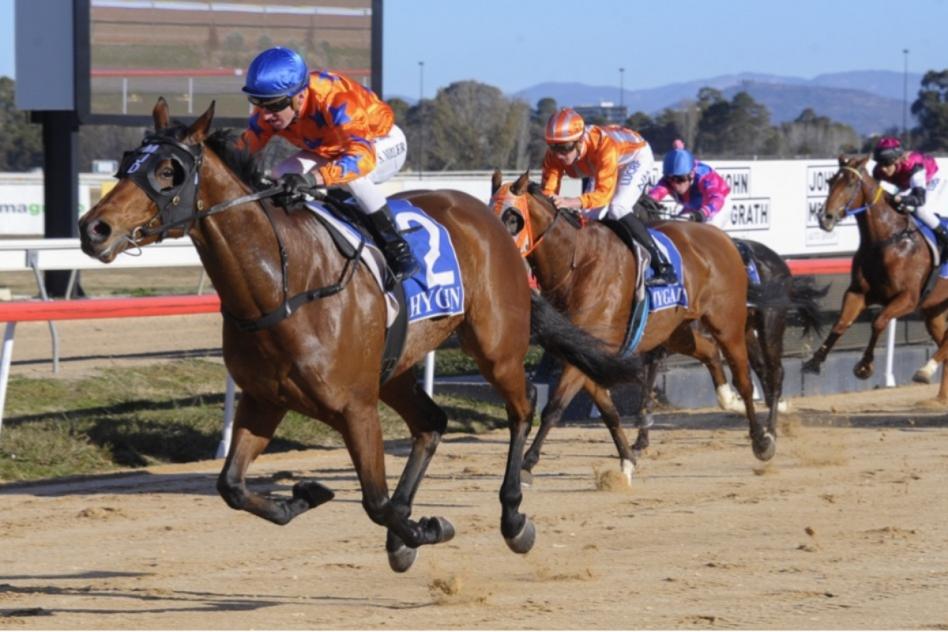 The Rail was out 7m and the track presented a Good 4. In most races the jockeys were looking to find forward positions. Only one favourite delivered won on the day but most winners were well in the market. The biggest upset was Upper House’s win in the Open Federal. He drifted form $9—$16 and finished over the top of them. Blaike McDougall, Jess Taylor and Alysha Collett all rode two winners.

A small field of 2yo debutants and the market almost got it right with the Sydney-trained newcomers fighting it out. Volcanic Rock the $2.40 favourite beat Belle O’Ballee $4.20 by a whisker with Wilsons Prom $2.80 a half length away.

It was a big effort by Volcanic Rock. The colt was expected to lead but Wilsons Prom came across him and he raced as a result until sent forward after the 600 to sit outside the leader. Wilsons Prom who railed like a greyhound and set off for home. Volcanic Rock hung in on turning and was a bit wayward as he gathered momentum and Belle O’Ballee emerged on his outside. Volcanic Rock really knuckled down the last 100 just beating the latter. The Queanbeyan-trained King Gutho was doing his best work late and wasn’t disgraced in this competition. Volcanic Rock is still a work in progress but showed he knows how to find the line, as does Belle O’Ballee. Wilson’s Prom is ready-made and was brave.

Princess Of Meydan raced a $2.40 favourite but had to settle for a rather unlucky third behind Emma’s Gift $4.60 and Northernero $7:50, beaten less than a length after meeting bad luck at various stages.

King Wimble led from Emma’s Gift sitting on him and Princess Of Meydan railed through to trail after a slow off. Northernero was caught three-wide on the pace. The leader was feeling the pressure at the 200m and the other pair settled down to fight it out with Emma’s Gift prevailing by a lip. Princes Meydan flashed into third after having all sorts of trouble securing a clear run in the straight, beaten less than a length. River Mac $9 had loomed to be a serious contender but wanted to hang-in in the stretch and there was a lot to like about his effort as well. A gap closed on Can’t Get Enough $9 in the straight and he also impressed when finally getting a go at them. Emma’s Gift had the easiest time of it but it was a dogged win. The next four all had various excuses and expect this to be a good form race.

A keen betting affair. Cubman $4.80 got up in another keen finish coming off a provincial Maiden win. Fountain Of Youth $15 made second just ahead of Nuremburg Castle $3.50 with the favourite Ashra Jahre $9 two lengths from the winner in fifth.

It was a charge early with Fountain Of Youth holding the rail before being crossed later by the speedy Stella Baia $9.50 who had been caught very wide. Cubman sat last on the rail with Nuremburg Castle of his outside. Fountain Of Youth held a clear lead at the 200m. Cubman got a dream run through when runners peeled wide and was winding up with Feeling Mighty $4.80 and Nuremburg Castle emerging wider out. It was hard fought with Cubman getting up by a half-length. Nuremburg Castle was held up improving and had to come across heels in the straight and there was a lot to like about his finish. There was less than 3L between the top six and most get a tick. This was the fastest of the three 1000m dashes.

The local Fusca $4.80 took this out with the favourite Successful Day $3.10 beaten 1.5L into fifth. The next best-bet was Vox Pop $6 who finished a lip ahead of the above in fourth. Intercontinental was a late scratching.

Motime $11 flew from a wide gate to lead Vox Pop and the favourite settled fifth but was over-racing and moved forward three-wide before turning. They’d bunched right up and Vox Pop held the lead at the 200m but they were coming. Successful Day was there but was already hard at it. The winner had sat wide midfield and emerged through the centre to go and record a strong win. Supreme Lad $21 had been rearward in the run darted and through on the inside to just grab second from Eurosay $9 who was widest on the turn and hit the line hard. Fusca made sharp improvement off the first-up placing and will win again based on that effort. Successful Day didn’t do herself any favours in the middle stages and toughed it out bravely in the bunch fighting out the placings. She will improve and be much more competitive next time with that under the belt.

The favourite Dip Me Lid $3.80 was a touch easy and went down a nose from Alpine King $5.5 with the outsider Dannevirke Lad $26, 1.4L from the winner in third. The former Queenslander Nicholas ran a firm $4 but disappointed.

Appetising used the low gate to lead as expected with the other front-runner (and winner) Alpine King sitting on him. Dip Me Lid got the perfect trail with Dannevirke Lad behind him in clear air. At the 1000m the leader had put 2L on them with the order unchanged. Alpine King was going comfortably at the turn and Dip Me Lid was under hard riding. This pair engaged in a ding-dong go for the line with the winner just prevailing and the other placegetters battling on. Nicholas loomed a chance midway down the straight but could find any extra. He’ll be fully fit next time and is worth another chance. The winner tends to be in and out but is capable on his day and gives himself every chance. Dip Me Lid was good first time at the trip and is ready to win.

Gambler’s Quest ran a $3 favourite and there were a number of others given some chance. One of those was Always Sure who drifted out a lilt to $6 before delivering for the Cunningham yard in another close finish. He just pipped-out Dom Tycoon $41 who almost provided the boil-over. The well-supported Chateaux Park $5 just held third. Gambler’s Quest disappointed beaten 3.4L after overracing with the blinkers for the first time and the rider lost the whip at the 100m.

Again there were plenty looking to take up a forward position. The leader About To Launch $51 had to do plenty to cross from a wide gate as did another unfancied runner Addison Reserve $31. The favourite trailed close-up off the rail but over-raced in the early and middle stages. Dom Tycoon was three-wide behind and Always Sure was midfield three-wide with cover. Chateaux Park railed behind them.

The leader was gone at the turn and Addison Reserve and Gambler’s Quest straightened in front and were 3L clear at the 300m. You always felt they were going to feel the pinch. Always Sure had improved to be the widest runner entering the stretch and he came hard down the centre to swamp them at the 50m. Dom Tycoon also finished it off well on his inside after a tough run and Chateaux Park and Reelclass $9.50 also hit the line well. An eye-catcher late was Read All About It $15 and put him in the blackbook when races over a longer. The stewards were advised post-race that the blinkers would come off Gambler's Quest.

Upper House $16 resumed and came over the top of them to beat the Dryden-trained pair Balonne $11 and Scarleo $3.60. The favourite Supreme Polarity $3.30 was beaten just 1.2 into fifth in a keen finish.

There were five runners looking for forward positions on jumping with an outsider Hay Bale $41 working hard to lead before the 800m with Scarleo on his outside and Supreme Polarity getting a nice drag behind the pair. Upper House was in the pack and had a wall in front of him on turning.

The on-speed trio were clear on straightening with Scarleo looking the most likely and with Supreme Polarity ready to pounce. Upper House got a split and commenced a powerful finish to win handsomely. Balonne was back in the run and one of the wide on the turn and once securing a run monstered the line to nab second ahead of the brave stablemate.

Upper House was coming off a 19 week spell and drifted from $9 in early markets. It was a cool ride by Jess Taylor and another good piece of training by Norm Gardner who can turn up an upset. There’s not much between the better ones as the finish attested. Banger $11 was good late in fourth and it will prove a good form race. The favourite just found a few too good on the days and will improve off the run.

There were a number given a chance and it was a thrilling finish. Post Free $9.50 (Williams-McDougall) got the job done by a lip from the Snowden-trained Nu Jiang $5.50 and the favourite Upscale $3.60 less than half a length away in third.

The winner dipped on jumping from but soon found a nice mid-field position one off the rail. The well-supported Singing River $3.90 found a clear lead crossing the favourite who trailed. Nu Jiang was beautifully positioned behind them. It was evenly run and Upscale took the lead at the 200m but Post Free was finishing hard on his outside along with Nu Jiang a bit further out. Post Free just got the nod over Nu Jiang, just nabbing Upscale. Post Free had to cut back to the inside at the 200m and it was a good ride. The three can all be followed with confidence. Lamington Drive’s run also held plenty of merit. He made a long sustained run before turning the widest and was a good effort to make fourth.