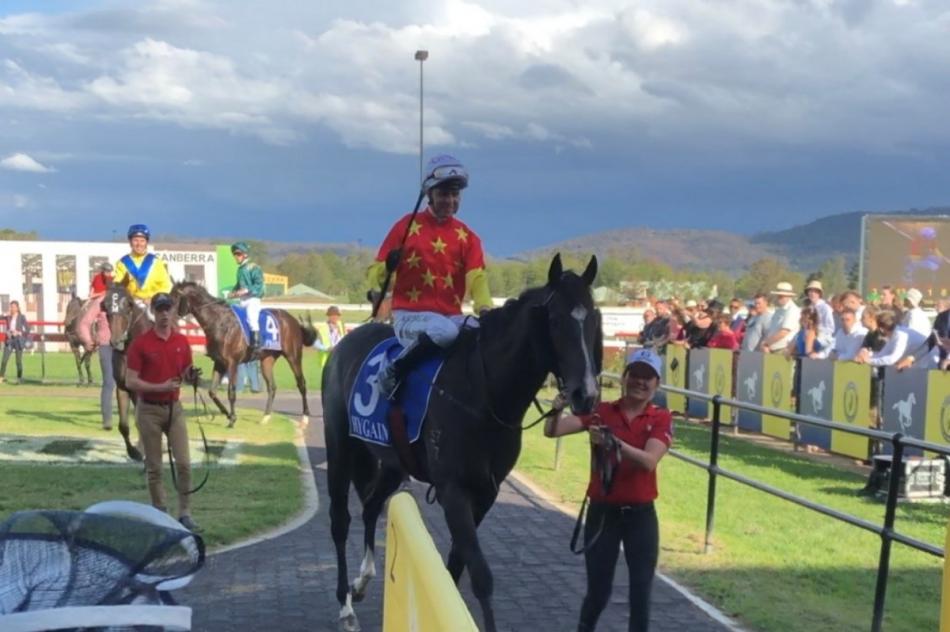 The rail was out 4m the entire and they raced on a Good 4. Three favourites got up but it was generally a tough day for punters with a dead-set head-scratcher in the second.

Gaelic raced a $1.45 favourite and was beaten more than 8L. The jockey told stewards that his mount travelled well until the 600 and didn’t respond to riding after that point. No abnormalities were found post race. Dance Too Hard started on the second line of betting and also disappointed. Stewards inquired and the jockey said she had to use up the mare early to sit outside the leader but didn’t respond to riding in the straight. No abnormalities were found with her either. Kitty Karine suffered a bleeding attack and incurred a mandatory 3-month ban.

MOHAHNA $8:50 had disappointed at the previous but got the key jockey-switch to McDougall for this and turned things around for the Nick Olive yard. He was eased to sit just behind the two leaders — Gaelic and Dance Too Hard — who pressured each other. At the 600m the roughie Circus Train made a lightning move to share the front four-wide on turning with the winner on his inside. Mohahna took over down the stretch as the leaders compounded and won comfortably from MY EMPIRE $8.50 and SINGING DIXIE $19 who both finished well. My Empire was the unlucky runner held up for clear running rounding the home turn and until passing the 300m. Connections would have been pleased with the better effort from Singing Dixie. Mohahna was much too good getting the sweet ride and can go on from this.

Alpine King won the race at $31 dollars in a complete form reversal. There were no explanations asked or given in the stewards’ report. He was impossible to come into from a form perspective. Temoin Chaud and Eaglehawk headed the betting but couldn’t make the top three.

It was busy early with ZAROMATIC $16 settling in front with ONE OF A KING $7.50 pressuring outside the mare. They were bunched behind them. They held their order well into the straight with Zaromatic briefly looking the winner before ALPINE KING — who had lobbed along at the back — came through the middle and swooped on them to win comfortably. We’d had him down to potentially leader the race and he obviously relished the reverse role. TRAPPER TOM $9 held his form with a solid second and the well-fancied TEMOIN CHOID $3:20 was doing her best work late in fourth and may be looking for further. Not sure what to make of the race, but the winner was simply too good.

The well-supported Havaduel and the favourite Power Listed ran second last and last respectively and the stewards inquired. The former didn’t have the best of runs and no abnormalities were found post-race. Ditto the latter and the jockey’s preliminary view was that her mount was stepping up in distance and may not have run out the 2000m journey. The trainer expressed the view that the gelding may have displaced its soft palate and he undertook to provide to stewards the results of an endoscopic examination.

The race provided another upset with CLEVER MISSILE $16 beating APPETIZING $13 and CHIEF KIDDER $6.50. A race where the dry track found out a few of the better supported runners.

Appetising found an easy lead from Charlie Royal with Havaduel third three-wide trying to find a spot. Clever Missile lobbed along midfield on the rail and ditto Chief Kidder further back. The leader was going well at the turn and Havaduel was already under plenty of pressure. Clever Missile got a dream run through and it was clear passing the 200m that he easily had their measure winning by more than 4.5L. Appetising stuck on well from Chief Kidder who was doing his best work late as was HILLTOP HOOD $7.50. The winner had switched yards and had been freshened and it was a super effort in the circumstances.

Favourite punters breathed a sigh of relief when Wholesome Delight delivered well-bet. Plenty of horses featured in the stewards’ report that may have offered some excuses for connections.

WHOLESOME DELIGHT $2.50 was a touch slow away but soon mustered to hold the rail with GRAND LUSITANO $8 on her outside. That was the order on turning for home and after a ding-dong battle Aerobatic Warrior got the upper hand to win by a half length. The filly was well prepared for the debut and will certainly go on for this for the sharp Sydney yard. Grand Lusitano was on debut for the local yard and also impressed. The Pepper yard looks to have a good one on its hands with him. AEROBATIC WARRIOR $3.70 caught the eye late getting into third and can be supported with confidence next time out.

MACCOMO raced a $2.70 favourite placing fourth.  SABOR was next best bet at $2:70 but had to settle for second behind ARCTIC THUNDER $8.50 racing on debut in an all Sydney finish. There was little of note from the stewards.

Arctic Thunder led early but Sabor soon crossed over and made the speed. The favourite settled in a perfect stalking position. That’s how they turned for home with Maccomo presenting four wide. Sabor got ahead and looked the winner before the 150m but despite racing a bit new Arctic Thunder wasn’t done and flattened out to win by a half length gobbling up the ground. GENERAL DUBAI $8.50 had sat back on the rail and his finish was a real eye-catcher. Maccomo just battled a well-beaten fourth. Arctic Thunder had trialled well for the debut and will have taken fitness and learning away from this. Sabor was well-prepared for the resumption and will also go on. General Dubai goes in the blackbook.

Punters found this a tough form assignment and it was $5 the field. AKEED $6.50 took it out building on the solid first-up effort at Moruya for the new yard. Oriental Gift and My Little Racer were both slow to begin. Revolver and Mad As Zariz both raced wide throughout.

There was plenty of pressure early with four runners vying for the lead with Akeed holding the rail and REVOLVER $9.50 working four wide. Akeed held a clear lead passing the 350m with VERDI $5 emerging with MAD AS ZARIZ $6 who’d eased out of the early speed battle. Akeed fought like a tiger and just held out Mad As Zariz with CHARLIE CHAP $12 a close-up third after making up a tonne of ground down the centre burning turf. There was a stack of merit in the performances of all three and with the finishing burst of Charlie Chap an eye-catcher.

It was an open race on paper but OUR FINVARRA $3.80 was the one most punters wanted to be with and he duly prevailed after the tough placing this level prior. Stewards inquired into the run of the disappointing ONTHETAKE $5.5. The mare raced keen and did a number of things wrong and didn’t respond to riding in the straight. The trainer said she’d be sent for a spell. The performance of ELEGANT ELLEN $10 was also queried and no abnormalities were found. Ons Vier raced wide throughout.

The winner jumped cleanly and settled well behind the leading pair — Elegant Ellen and Concrete. Concrete took over in the stretch as Elegant Ellen fell away, but Our Finvarra after a sweet ride soon had his measure and came away to win by nearly 1L from the fast finishing ROYAL MONARCH $14 who had a good run throughout just behind the speed, with Concrete a lip behind in third fighting on. ZELAGO $6.50 was doing his best work late and is worth sticking with. Our Finvarra has never raced better and can win again based on this effort.

Favourite punters were again on target with the heavily-supported BLAZING MAC $1.65 winning for the Sydney yard as expected. It was very quiet on the stewards’ front.

It was a mad charge up front with the favourite coming away to lead and she was jointed at the 600m by Butch’N’Bugs. Blazing Mac was cruising on turning and proved a class above winning eased down by 3L from TIZ WAR BRO $19 and 6L to She’s All In in third. Blazing Mac relished the dryer surface and is a lovely moving galloper who will win more races. Tiz War Bro had railed behind the speed and it was a tidy effort off the brief freshen. Nothing much to say about the well-beaten rest.