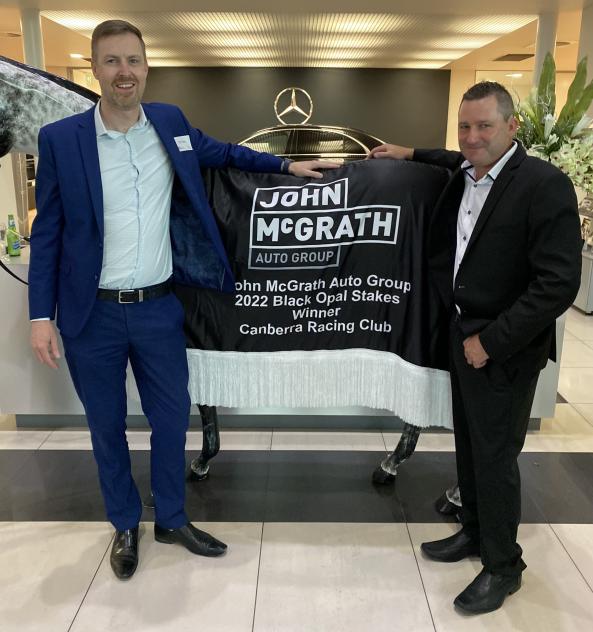 Socialites & racing fans enjoyed a sparkling evening at the beautiful Mercedez-Benz Showroom last night for the Black Opal Stakes Cocktail Party. An event celebrating the great racing that is about to unfold across the upcoming Canberra Racing Carnival was attended by some of Canberra’s biggest personalities. Members of the ACT Legislative Assembly, Canberra Raiders coach Ricky Stuart and a number of his players enjoyed mingling with racing participants and fans alike.

Local racing icon, Group One winning trainer Barbara Joseph took to the stage to share stories of her stables recent success. Training alongside her sons Paul & Matt Jones, the stable landed a City winner in Room Number in late January at odds upwards of 80-1. While the bookies didn’t give the mare much of a chance, Barbara was quietly confident and couldn’t get out of her recliner at her Bombala home quick enough when she hit the front with 200m to go.

Going for three winning tips in three years at this event, Barbara steered the crowd into exciting three-year-old Manderboss who will line up in the recently announced ninth race on John McGrath Auto Group Black Opal Stakes Day. The Mane Lodge Handicap (1600m).

Leading Trainer Matthew Dale then shared his thoughts on the upcoming Carnival and plans to have a number of great chances across the two days including Five Kingdom who will line up in the TAB Canberra Cup. Matthew is on track to win his 3rd Canberra Trainers Premiership after a brilliant 2021/2022 season so far.

While Matthew has tasted premiership glory before, one of his leading riders Kayla Nisbet is still on the hunt for her first Canberra Jockeys Premiership. Kayla spoke of her desire to win the Senior award, becoming the first female to do so and needs just one more win to overtake Damon Budler on top of the ladder.

Kayla will ride for her father John Nisbet and his Co-Trainer Ron Weston in the Listed Seears Workwear National Sprint (1400m) when she climbs aboard Mad As Zariz. Mad As Zariz is in the form of his life, beating home a number of quality metropolitan gallopers on his way to a third placing in the Affinity Electrical Technologies Canberra Mile (1600m).

The Black Opal Stakes Cocktail Party was again one of the events of the Autumn and saw many members of the community come together to celebrate after what has been a tough 24 months as we all look to mark a new beginning with the upcoming Carnival.